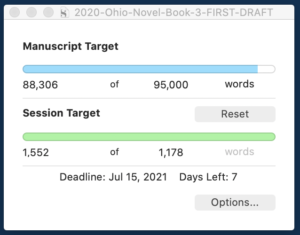 I am very pleased to report that the rethink on what had to happen to end Ohio Novel #3 worked.

So did the revelation I had last night that I remembered to write down in my bullet journal yesterday, which was just this:

“B” tells “T” to carry the walking stick.

(Names disguised because all identifying details stay under wraps until the pseudonym goes live and the books are in print.)

“B” tells “T” to carry the walking stick.

Is that a big nothing of a line, or what?

It doesn’t seem to have anything important in it. No promise, no wonder, no conflict… NOTHING.

And it didn’t have any promise to me last night when I wrote it down, except that my muse said, “Do it.” So I did it.

But this morning, it was magic. The final conflict in the story rolled out of that dumb line, wrapping into one solid scene a secret from a lost past, love of home and all its places, monsters and violence… and a couple of surprises I can’t even hint at…and it rolls perfectly into tomorrow’s work, which is to write the right scene to go before the LAST scene.

The last scene — my Book 3 Perfect Ending, is already written. It was a scene in the middle of the book that failed to fit or to mean much of anything until I saved it and just dragged it to the end of the book to save, where it revealed itself as THE RIGHT ENDING.

I’ll finish Book 3 tomorrow, and Friday, I’ll re-outline Book 4. (That might take more than just Friday, by the way.)

But, wow… my muse was on a roll last night.