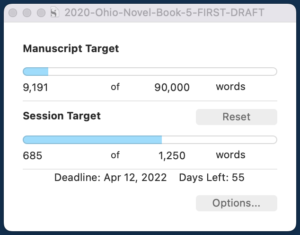 Turns out my MC’s late and much-lamented grandmother had a secret she was keeping from those nearest and dearest to her.

This secret might explain a scene in the very first book.

The grandmother’s personality, by the way, is spun off of my maternal great-grandmother, who lived to be almost 103, and who was a CHARACTER.

God, I loved her. She was seventy when I was born, but she and I were friends right up to her death, when I was thirty-three, and she was 102 and a whole lot of change.

She was fierce, and fearless, and grumpy with almost everyone. But when I asked her to tell me about what life was like when she was a kid, and later, a young woman, she told the best damn stories.

Hers was a world without electricity or running water, without cars or planes, without fancy grocery stores. She delivered the mail on horseback when her father (who’s primary job was blacksmithing) was too drunk to do it. She was courted by a number of beaus, but married a young blacksmith who turned out to be an awful choice, though she divorced him and married him a couple more times. They had three kids.

Hers was a world without nukes on the plus side — but with a lot of deadly air-borne and water-borne diseases on the minus side.

She initially thought cars were a joke. Like me, she loved horses.

I lived in a piece of Grandma’s world when my parents moved us to Alaska for a year and a half when I was nine (back in 1969). Because of that, I, too, have washed clothes in a washtub using a washboard, and dried them on racks beside a wood stove. Have eaten food cooked on and bread baked in that same stove, which was also most of the day heat for the house. (The wood furnace below was the heat for the boys dorm above our floor).

I have drunk water pulled straight out of the river and sanitized with Clorox, because no one anywhere up or down the river had plumbing (permafrost is not the friend of water pipes), and old cultures generally aren’t eager to adopt new technology anyway. So we had outhouses and a honey-bucket, and the folks upriver from us had the same. And the river was full of water-borne bacteria.

I helped catch food and clean fishing nets, and have lived without TV, or radio, went to school in a one-room schoolhouse in the attic of the house where we lived, had frost completely occlude the single-pane windows in that enormous log cabin in winter, skied on the river on a rope tied to the back of a snowmobile, rode in a dogsled pulled by a team of huskies, watched the midnight sun in summer.

Some of that stuff is now working its way into this series — bits of a hard and primitive past that are now colliding with a very different, easier but also more difficult and much more dangerous present.

With… of course… alien magic.

Every once in a while, I make myself cry. Mostly, though, I’m having a lot of fun.

Get Holly’s Free Fiction Sampler, plus Weekly Fiction Updates, and when these books go on sale, get invited to the launch.

Next post: 300 words on Ohio Five… and the discovery of how something clever got done