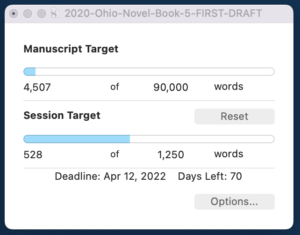 It was NOT a nice day for my main character, who experienced pain, and feeling like a jerk (deservedly), and who has been tucked out of the way for the time being with the simple instruction “STAY OUT OF TROUBLE.”

I don’t see that going the way the person who gave her the instruction had hoped. It won’t be because she engages in “voluntary stupitude” in which the character knows the intelligent thing to do and doesn’t do it because she’s an idiot.

Rather, tomorrow something is going to go badly wrong so that she HAS to not do what he told her to do, because if she doesn’t act, worse things will happen than the things that have happened already.

But I have no idea what’s going to go wrong…

I’ll find out how and why she doesn’t do the simple thing she’s supposed to do tomorrow, while I’m writing it.

Right now, stuff is just cooking in the back of my mind.

Get Holly’s Free Fiction Sampler, plus Weekly Fiction Updates, and when these books go on sale, get invited to the launch.

Previous post: 409 words on Ohio Five… and the shoe dropped. PLUS a site update.