Ohio #3: Net gain of 1079 words … and quick notes about The Emerald Sun and the Moon & Sun series 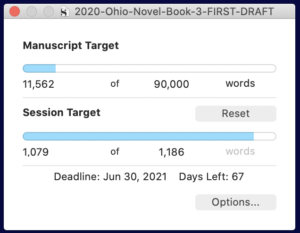 As always, I started out the morning by doing a quick read-through of what I got the day before, doing light edits (and sometimes removing stuff that does not work), and then rolling from there into writing the new scene.

I lost a chunk of words to having managed to say the same thing twice yesterday in different words — I kept the better version. Still ended up with a net gain of 1079, and I’ll take it. It was a tougher-than-usual three hours, but it ended well.

Years ago, I sold a three-book YA series to Scholastic — The Moon & Sun series. And wrote the first two novels, The Ruby Key and The Silver Door.

And then got the news that “the series isn’t doing as well as we had hoped.” The series was cancelled, and I never wrote the third book.

There has been a bit of a discussion going on elsewhere in this blog about that series, and about the still-not-written Book Three (The Emerald Sun).

To bring that conversation into this decade, I did get back all rights to the first two books, and last year I started into Book Three.

However, I realized that I have no hope whatsoever of making back enough money on those books to pay me for the time it would take me to write the last one, edit and typeset all three, pay for the cover art for them, and republish them.

There weren’t that many readers in the first place, all the folks who’d read them are now adults…

My problem is that I still want to finish the series.

And with the Ohio Novels — a world I love set in a place I love with characters I love, and that is in the popular Urban Fantasy genre — if the Ohio Novels are successful enough, maybe I could afford to write the third book of the Moon & Sun series and not have it pay me a working wage.

I figured this out last year, and put The Emerald Sun on hold, and started into the still unnamed Ohio series.

If the Ohio Novels sell well enough, I’ll take a one month to finish the revision of the Cadence Drake novel The Wishbone Conspiracy, and another month to get it into print. And then I’ll take six months to write The Emerald Sun, and over the next year, working on those three books after getting my day’s words on the sixth Ohio Novel, I plan to bring out all three Moon & Sun novels in my own editions.

It won’t be fast… and I’m sorry about that.

And if the Ohio Novels don’t take off for me and start bringing in an income that will cover speculative projects, it won’t happen at all.

But that’s the chance I have, and I’m going to take it.

If you happen to be one of those folks who has been waiting forever for those those books, sign up in the form below to get my weekly updates. If and when I’m able to start into the Moon & Sun books, that’s where you’ll hear about it — and where you’ll be able to get special private-list-member early-buyer prices.

When (if) I can afford to write and publish the Moon & Sun books, you’ll find out first here. Sign up below.

Previous post: On jury standby — so I wrote 1279 more words, and discovered the answers to a couple of grim secrets