At the moment, in my meager spare time I’m working on building up a supply of novel ideas, so that I can start doing a bit more on-spec work (work where the writer writes the whole novel before attempting to sell it.) Without getting into why I want to do this odd thing, when it seems to be moving in precisely the opposite direction from the professional career arc, where the objective is to get more and more money for less and less advance work, I’m simply going to offer the series of questions I’m using to knock out some basic ideas that I can then refine.

If you want to write a novel but you don’t know what to write about, give this a try.

Start out with the following:

[Genre in which you want to write] —[Single sentence or sentence fragment that offers you two or three characters, a catalyst, and a conflict]

Supernatural Romantic Suspense — Small-town Midwestern violinist (heroine) meets returning-to-his-roots bad boy (hero) when the stage on which she’s performing collapses (catalyst) after she receives an eerie warning not to perform that night (conflict).

This is not a great story idea. I came up with it for this outline, and at the moment it’s pretty lame. But that’s okay. It’s just the a jumping-off point.

Once you have the very vague beginnings of a couple of characters, a quick peek at a catalyst, and a tiny chip knocked out of the conflict, you can really make something out of this. This is, in fact, a micro-example of the process of writing the whole book and revising afterward rather than engaging in endless revisions of the first chapter or two, another technique I recommend for people who genuinely want to write rather than just claim that they’re writers.

So once you’ve picked a tentative genre and thrown a few vague words against the wall, what questions do you ask to make them into a real story? Start with the questions I’ve listed below, modifying them to suit your genre and single-line idea.

I’m using hero, heroine, villain, and catalyst in the questions below, but you aren’t bound to those, either by gender or by number. The catalyst can be a person, place, thing, event. The conflict will come if you just let yourself relax about it.

You don’t have to do this in outline form, either. In fact, I strongly recommend that you don’t. I certainly don’t. I cluster these questions, and answer them (while asking myself even more questions). 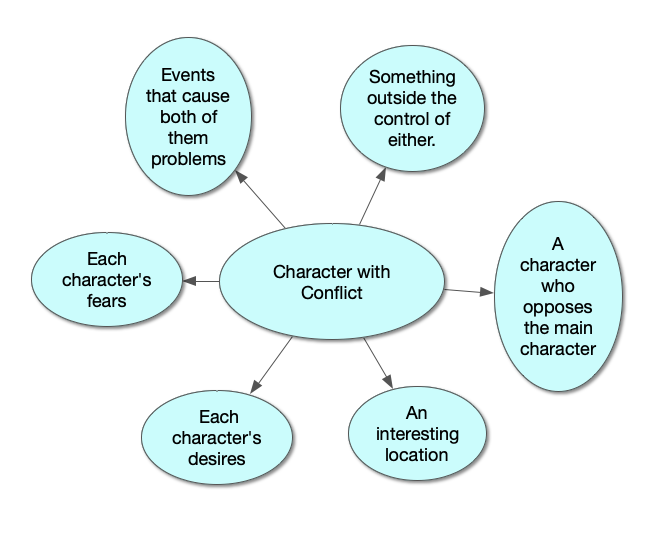 By the time you’ve answered these questions, your inital sentence for the book may be nothing but scrap words for the Delete key. But you’ll have something far better than a basic idea. You’ll have a solid and powerful foundation for your next novel.

If you want a story to come to you, all you have to do is ask.