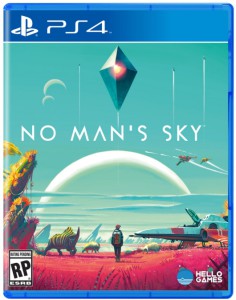 Before I review No Man’s Sky, you need to know two things about me. 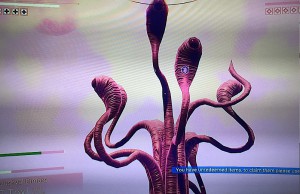 The tree has eyes!

ONE: Back in 1970 when I was nine, we moved from Ohio — where I’d spent my entire life to that point — to Alaska, and suddenly I was a nine-year-old girl living with my parents, little sister, and very little brother in a log-cabin boy’s dorm heated by a wood-burning furnace on the tundra four miles by river from the nearest village (Kwethluk).

I was the only white kid and the only native English-speaker in the one-room school in the attic of the boy’s dorm.

I discovered a world where food came to us once a year by barge and anything we did not order we had to hunt and kill and clean ourselves (and I learned how to mend and clean salmon nets and how to clean game birds because children in primitive places can do real work).

I learned that if it’s -81 degrees Fahrenheit and you throw hot coffee into the air, it freezes instantly and explodes with a sound like a shotgun going off. This was, by the way, the coolest real-world demo of “why you can’t play outside today” ever done by a father.

I skied on a tow rope behind a snowmobile, and listened to wolves singing at the moon.

I listened to people speaking and singing in foreign languages, wearing clothing unlike anything I’d ever seen before, telling stories by crouching on the ground and smoothing the summer mud with story knives and drawing pictures in it.

I wore a wolf-ruffed parka and sealskin mukluks because this is how you don’t die in a deadly environment.

I was ripped out of what I’d mistaken for “the way things are everywhere” and thrown into the reality of “Ohio is not the whole world, or anything like it”, and…

…I became an alien. A stranger in a very strange land. And simultaneously discovered science fiction, in the form of a wonderful stack of YA books left behind by the previous children’s home dorm parents. 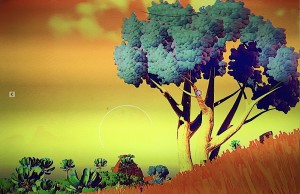 Beneath A Lemon Sky

TWO: A year and a half later, we returned to Ohio.

I became that weird kid who’d lived in Alaska.

I had learned that there are still places where hunting and fishing are what stand between you and starvation.

I had become a heavy reader and a lover of science fiction. And I was a skinny eleven-year-old girl with glasses in a new school in a new town with no friends.

I no longer fit in back in the world I’d once considered normal. I realized that I was never going to be normal again.

I discovered Star Trek, and also that if I ran home from school instead of taking the bus, I could get there in time to catch Star Trek re-runs. So I did — and I fell deeper in love with outer space.

At eleven, I wasn’t yet an atheist, but I was already having serious doubts. I was giving religion its first long, hard look, and it wasn’t doing too well.

But I did pray, every night. This prayer:

Now I lay me down to sleep,
I pray the Lord my soul to keep.
If I should die before I wake,
Please don’t make me go to heaven;
Let me go to space.
(And P.S. May I please have a pony?) 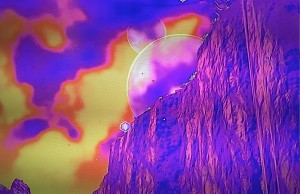 Planets Above — And I Can GO There

The horse thing came and went.

My whole life (and I’m fifty-five now, and getting pretty close to fifty-six), I have yearned for starships, aliens, strange skies, faster-than-light travel.

I discovered early that my hellishly bad math skills were going to disqualify me from ever being an astronaut, even if being a girl didn’t — and remember, when I started school, girls had to wear dresses to class and “you’re only a girl” was still not just a common phrase, but expected. And acceptable.

Back then, girls went to college for their MRS degree (as in Mrs. Robert Biteme, for those of you who are female and young enough that you’ve grown up with the expectation of actually getting to use your own name your whole life). 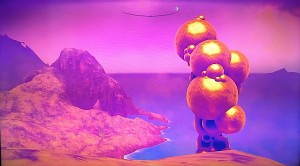 Every year after that, from the time I was eleven until the time I was sixteen, I changed schools again. Moved again. To Costa Rica, Guatemala, back to Ohio. I learned another language, got comfortable with being the perpetual outsider, the perpetual alien, the only “whatever everyone else isn’t.”

I learned to observe, to watch, to listen, to think. I lost religion, gained reason, logic, and the scientific method.

I knew I was never going to get to go to space — not in the real world. So I became a science fiction writer, went to space in my head, and took readers with me. 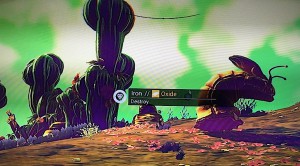 Two years ago, my younger son, then sixteen, told me about No Man’s Sky.

I thought, “Maybe this time.”

And the two of us waited for it to come out. 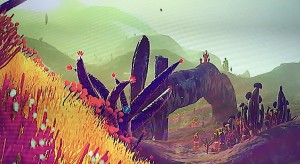 Not Kansas. And not Ohio, either, Dorothy.

At the stroke of midnight on August 9th, with my pre-ordered copy of No Man’s Sky and the first patch already loaded up, I went to space.

The timing was pretty much perfect. I was recovering from Yet Another Surgery on My Damn Tongue, I was in pain, I was still dealing with not eating and not speaking because I had a tongue full of stitches.

I was too tired, too in pain to work.

I soared through a shifting sky filled with stars to wake up on an alien planet, to discover that I had limited resources and a broken space ship.

I thought, I experimented, I discovered.

I found ways to use the terrain around me, to harvest resources.

I figured out how to fix my ship, I got it airborne. I started discovering the planet on which I’d landed. 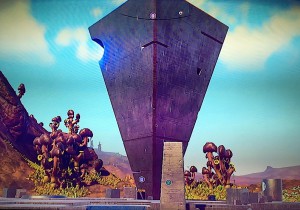 How to commune with aliens.

I started cataloguing creatures and plants, earning money, learning alien languages and decoding conversations and figuring out how each alien race thought so I could get better rewards.

Not my first time, and it turns out being an alien in your own life prepares you pretty well for being an alien in No Man’s Sky. Even with tiny linguistic cues, I turned out to be pretty good at figuring out the cultures and getting the good stuff.

I was less good at fighting pirates.

And when you have mined minerals like a lunatic to buy yourself a kickass spaceship, and have filled your hold to overflowing with awesome space loot, there are gonna be pirates.

I died a few times, and discovered that the game is insanely forgiving of death. 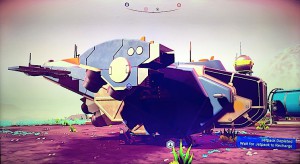 I went back to my space station and my ship, flew out to the spot where I’d died and picked up all of my goodies, and went on with the game.

I was not so forgiving. I built up my defenses, and started shooting down the pirates. Last night, with roughly {cough, cough} a hundred hours in the game in exactly one week, I successfully took out four pirates in an aerial dogfight on a planet, while dealing with gravity and terrain. Run, little pirates. You are my meat now.

The last of the stitches in my tongue worked its way out this morning. I’m feeling better. Less pain, more energy. So it’s time to get back to work.

But this was the first thing I wanted to do today, on my first day back in quite some time.

Thank you, thank you, fucking thank you. For making it possible for me to go to space, to walk on alien planets, find weird plants and animals and weirder aliens, travel faster than light between the stars. To name solar systems Wodehouse, Wyndham, Simak, Curious Cheese, and Questionable Condiments.

I don’t give things stars. I think stars are an idiotic way of rating something. But this game doesn’t need stars from me anyway. It already has billions (trillions? Quintillions?) of ’em.

And 18 quintillion planets circling them.