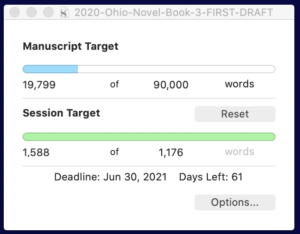 I’m grateful for writing, and for being well into a story that holds my attention and makes me need to know what happens next.

Having been fasting since Sunday night, I’ve now had nothing but coffee, water, and vitamins for long enough that my hindbrain has started taking action against me.

My legs keep picking me up and walking me into the kitchen and toward the fridge — until my mind catches them at their treachery and turns me around with some difficulty and walks me back.

But all the news is good news.

Being notified last night that I’m released from jury duty until the next term when I’m drawn, I was able to focus on the fiction (in between the fights between my mind and my legs), and get some good, tight words.

I threw myself into the story, and managed to not open the fridge, or touch any little “just something” snacks.

I am not by any means world’s greatest student of the art of fasting — but I can keep reminding myself that we’ll all eat tonight, and use that knowledge to reassure the part of my brain sending me in search of food when I forgot to block it that a meal is, in fact, not far off.

On today’s bit of the story: A father tells a daughter how she is to leave home — and why. And in her I found the replacement for the character who I’d planned for her role (while doing those five line-for-scene outlines), and who was entirely wrong for this particular part.

This is the third of five novels, and in it, a central battle is building — and NOW I have the right character to step into the role I’d arbitrarily assigned to an existing character who didn’t have the strength or the skills to carry it.

And since I always run at least a bit long, today’s word count is probably closer to a true 20%.

Now I’m off to do the rest of the day’s work. And the rest of this week is mine without concern for being pulled away from my writing by jury duty.

Readers — Join this list to be invited to the Ohio Novels launch when it’s ready!