Net gain of 438 words today. Could actually finish the book tomorrow, though. 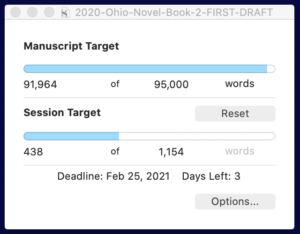 I ended up pulling out a lot of words today, but still came up with a net gain of 438.

And tomorrow’s chapter, the last one in the book (I think) is already written. It was, in fact, the first chapter that I wrote. And then I realized that the whole point of this second book was in that one chapter. And that while those events at the beginning of the novel was fun, it dropped a huge part of my little weasel character’s poignant past — which I didn’t even suspect until I wrote that first chapter, and the asked myself, who would go to all that trouble to get HIM?

Asking that question made me love him, and broke my heart a little, and the deeper I followed where that question led, the better I understood my MC, her past, her family’s past… and her very messy near future.

I would have lost a whole LOT of wonderful stuff by leaving that chapter at the beginning.

So I bumped the first-chapter event back about two weeks, and made it the last chapter.

I guess the finally book will be around 93,000 words, and could very well be finished in first draft tomorrow.

But for today, I’m done.

Previous post: Ohio Novel Merchandise… To be? Or not to be?