Mystery character D- became S- today as I got to know her better: 1330 words, and a good, solid scene 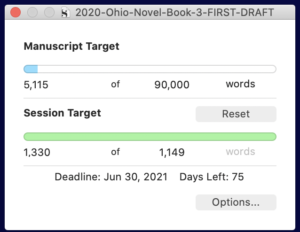 Folks show up when you’re writing, and audition for parts, and as you start writing them, you don’t know whether you’re wasting every word that includes them, or whether they’re going to make your story better.

You haven’t planned them. You have no idea who they really are, or how they fit into your story — but in the immediate moment, you give them names and let them run with the solution to the problem you’re having at right then… and you hope for the best.

Sometimes they turn out to be disasters, and sometimes you only realize deep in the middle of the book — when they’ve broken everything you’ve planned and have not replaced it with anything better. (As with my novel originally titled Closer to Chaos, which was published as The Wreck of Heaven after it nearly wrecked ME.)

Sometimes, however, you realize these volunteers are people you loved who are long dead — memories summoned from your childhood to carry a little bit of the book for you, and maybe do something meaningful in your world.

The character who showed up yesterday as as D- turned out to be an avatar of a beloved aunt of mine, changed in almost every way except for the quality of her character as a human being. And S- was the name the character, once I got to know her better today, picked for herself.

My aunt was wonderful, and I miss her terribly. And now she, as someone almost entirely new, has at least a small part in this story.

Next post: Today is brought to you by math…