My poor, poor characters! 1673 words, one scene that had my gut in knots… and a small and lovely win 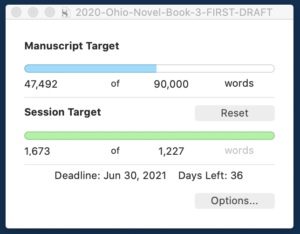 I was up early, which helped. Six AM gives you a bunch of extra day to work with.

But while I didn’t know what I was going to write this morning when I came in and sat down, I knew what the writing had to do.

And all I can say is that I pity the characters who show up out of my subconscious mind when I’m holding auditions for roles in novels.

Such awful, scary, scarry things happen to them.

This was the day where scars were born.

And this was the day when a couple of my key characters were hoping that they could hide in the closet where I wouldn’t find them so they didn’t have to show up for work.

But they walked into the page (grudgingly and trudging) and embraced their roles (while calling me by some impressively bad names)… and my hands flew. This was the Bad Things Happen, Bad Things Get Worse, And THEN… part of the book.

Second half of the midpoint for the novel, and for the series, AND for the character.

It will get worse for her, of course. Still two and a half more books to go, and the darkest darkness comes in book five.

But today was where my MC had to prove that she CAN do what she believes she cannot do, because without this moment, without this action, she would never have a chance of getting anything that she loves through to the end.

And while I was mentally gearing myself up to write this, having absolutely no clue what was going to happen today — only knowing why it had to happen… the still small voice of my Muse whispered, “We haven’t heard from Sam in a while…”

And the click that followed was a piece of my own childhood ripping itself out of my earliest memory and throwing itself onto the page, fitting disaster with survival, fitting monsters with home, holding my main character up and keeping her focused and resolute during an unarmed walk through an inescapable and unthinkable hell.

Previous post: I DID IT! I passed both the novel and the series midpoint!