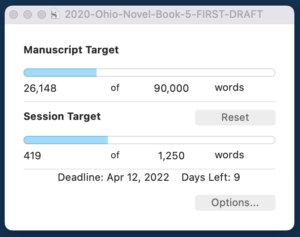 First, the words, because without the words, none of the rest of this would mean anything.

I got a solid chunk of a nice scene written today, added to the overall twisty-ness of the fifth book in the series, and both made things easier and made things more difficult for the villain… with one fun little move.

And by “nice scene” I mean that I did terrible things to my main character, while planning to do even worse things to her tomorrow.

So while I didn’t get a ton of them, I had a great time figuring out the bits I did.

On to the REST of my day, which I’m now getting started on.

I’m building out pricing boxes for the Half Price Ten-Day Sale over at HollysWritingClasses.com.

I promised folks who had been locked out on the old (and now happily dead and deleted and gone forever) site that they would get a chance to buy the classes at half price.

Since I did not wish to build a separate, hidden second shop from which to sell all the courses as a second price to just the folks who got locked out, there’s going to be a ten-day sale which my folks can take advantage of, and during which all of my classes (except for the Clinics, which have undergone a massive, permanent price drop) will be available for half price.

Next post: MINIONS!!! Minions are awesome! And today my main character had some!

Previous post: 761 New Ohio 5 Words… and a face-to-face with a feisty hero