I spent the morning writing fiction and putting together the rewards for my patrons.

And I’ve done a post on the Patreon site for everyone.

Today was my first day back to work after starting to prep for Hurricane Irma, and I came back to a lot of emails with questions about Patreon, and what I’m doing, so I’m going to answer them here.

“I would love to sign up but I’m not sure what the sign up page is doing? Is it linking me to a list or a payment plan (and if I use the email method … what does “password” mean? My password to your site or password to my email?) And how do you get payments?”

Patreon is not my site. It’s a separate site for people who create, and who are working to build incomes from their creation that allow them to pay bills, buy food, and make creation their full-time jobs.

Patreon recalls the medieval system in which the rich were patrons for artists (think Leonardo da Vinci or Michelangelo), who paid them to create, and then got to show off their creations.

Patreon has different ways of charging. I chose monthly payments rather than per-creation payments, because novels take a long time to write (in the “paying bills and putting food on the table” scale of time, and set a monthly amount of money per month against the number of bills and the amount of food my work in that amount of time could cover.

And Patreon will bill patrons’ PayPal accounts or credit cards on the first of each month, take a small percentage over the payment processing fees from PayPal and Stripe, and send what’s left to my bank account.

I would love to support you. However, my cash flow is pretty rigid, so if you could do a monthly option, it would be easier for me to plan to give you $10-$20 a month.

I don’t have anything set that high, because what I’m doing for rewards is… er … letting people watch me work. 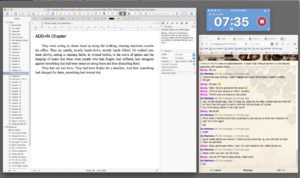 Screenshot of Month One Level 3 reward, 56-minute video of me writing a new first-draft scene for The Vipers’ Nest

There have been several folks who have pledged more (and in two cases, significantly more) than my suggested pledges.

But I don’t want this to be a hardship for anyone, and I still want you to get cool stuff that I can create WHILE I’m making fiction, rather than things I would have to create separately.

When you move, you should come to….

I got a lot of really cool invitations.

However, I have an adult kid in North Carolina, and an adult kid in Georgia, and I’d like to be somewhere in between the two so I get to see them from time to time. And I want to be well and gone from the ocean.

So I’m looking at places in western North Carolina, western South Carolina, northwest Georgia, or western Virginia. I’m an Ohio girl by birth, and I have no objection to the cold, to snow, to hills, or to raking leaves. I love to be outdoors, but Florida only has “outdoors” as I understand it for about a week in January.

I have not been outside voluntarily in seven years, because I don’t do well in heat.

I’m now writing 20 hours of fiction a month (though I ran over that limit by about an hour today, because I had to make the video reward, and I had to get to the point in the revision where I needed the new scene before I could write that).

The project I’m finishing is Longview #4: The Vipers’ Nest, and the rewards folks will get October 2nd will all be from that story.

Thank you again for making this possible for me.