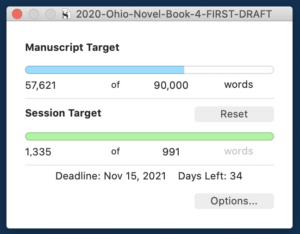 In my Ohio main character’s living room, folks who have befriended her and worked with her have just got some very bad news… as in, “Well, guys… we’re now potentially looking at the end of us, the town, Ohio… the country… maybe the whole world…”

And there’s a certain amount of lack of support for keeping going in the face of what are almost certainly Dire Consequences.

I tried to keep quiet and just let them talk, and they came up with some pretty good arguments for packing up their toys and going home.

So tomorrow, I’m going to have to see if my hero has anything she can put in front of them to change their minds.

Got 1335 words, more than the 1250 I needed. And I like what I got, though I really wasn’t expecting quite the level of vehement lack of support for T and her job.

I’m really hoping someone tomorrow is going to stand up and say, “You bunch of chickens… You lily-livered weasels…”

But with the stakes being whole-town, whole-planet, whole-solar-system… I don’t have a clue what any of them might say.

Fortunately, I don’t have to worry about that.

Tomorrow-Holly is the one who will have that land on her plate.

I’ve had people asking me for years when I was going to write The Emerald Sun and finish the series.

Here’s the problem. I have no clue how many readers actually want to have the series back in print, or to read the as-yet-unwritten final novel.

And until yesterday, had no clue how to get in touch with the people who wanted to read those books.

And without being able to talk to the folks who want to read the series, there’s no point in writing it, because there’s no way to reach them to let them know when I do.

But I had one person from my big list write to me to say, “I’m waiting on your list because I want to read The Emerald Sun.”

One. But that’s why she was/ is there… and there might well be other folks who are waiting for the same thing.

If that’s you, here’s your page: https://hollylisle.com/i-want-to-read-the-emerald-sun/

Go there, add yourself to the Moon & Sun reader’s list, and if you have some friends who share your reading tastes, bring friends. Reply to the ONE email on that list — right now there’s just one. Talk to me.

The problem is — and always has been — that I need enough readers for the series to do the massive amount of work (and incur the large expense) to bring the first two books back to life and write the third one.

This — building the list, and then talking to readers and would-be readers of those books in a way that will allow me to let you know when the books are available for purchase — is the first step.

Leave a Reply to YulianaCancel reply

Next post: My MC thought she had a GREAT solution for her nightmarish problem…

Previous post: Bumped my Book 4 first-draft deadline back to Nov. 15