This is the other remaining mural of the three I did in this classroom: The Hobbit, which I pitched to Mr. Rose as real literature that should be worth the same 50 points other Big Fat Books earned when you read them—and I won my argument. And then he let me paint a picture from the book on his wall, otherwise decorated with things like Beowulf, and the witches from Macbeth. (both pictured below)

Taking an artsy tone here: In this picture, you’ll notice that the artist’s compositional skills had improved marginally, as had her use of the medium of crappy paint on cinderblock. Also notable in this painting is the use of the block signature in the right hand corner in its original state, still lacking the surrounding chop block and without the year the painting was done incorporated into those surrounding lines.

End artsy tone.
I did this standing on an aluminum ladder with my head sometimes bumping the ceiling. And people say Michelangelo had it hard. 😉

So here are the other pictures. I’m sorry that I don’t know who painted them. They were already on the walls when I started my junior year and got Mr. Rose—one of the most fortunate formative events in my young life, getting Mr. Kerr for science the same year being the other. I had these two great men as teachers for both my junior and senior years, and with them, Doc Stok (Mr. Stockdale) for chemistry. 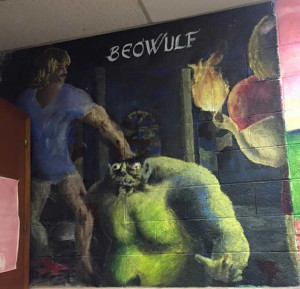 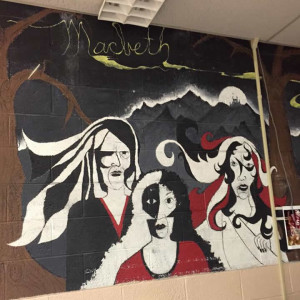 Finally and belatedly, huge thanks to Jean Schara, graduate of BLHS in 1978 (not the great and awesome 1979) for providing me with these pictures. I would have had no record of these painting I did when I was—I have now realized—seventeen and eighteen years old, had she not taken these and then passed them on to me.