Marketing Tuesday: Finished with my survey results (and a game) 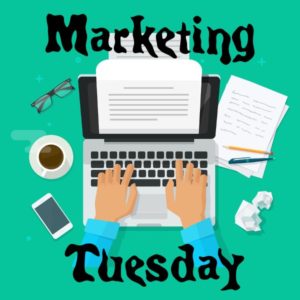 So, for as long as I’m doing Marketing Tuesdays, I’ve made myself a little image — with Scary Halloween Lettering, because for me at least, trying to wrap my head around marketing is scary.

But I have the most amazing readers. I had a massive response to my three-question quiz. Thank you to every single reader who answered — there’s a story that will be coming your way once it’s written.

The results were compelling, consistent, and very, very revealing.

So I’m going to have to do a bunch of stuff over the next months.

Get or make new covers that accurately reflect the contents of my work.

Change titles on some work: It was noted by a number of respondents (and my husband) that both Hunting the Corrigan’s Blood and Warpaint are dreadful titles that are not even marginally reflective of the contents or genre of the stories they contain.

Create new editions, making sure that the books contain their previous titles so there’s no confusion or accidental double-buying.

All of this while still working on the current novels, Dead Man’s Party and The Wishbone Conspiracy, which I’m just letting you know right now is another awful title and is as of today relegated to the status of Working Title That Sucks, and That I’ll Fix In Revision.

Was talking to my older kid, Mark, last night, and he mentioned that he was writing a text adventure using software named Twine. I was knitting while talking on the phone, and made a smartass comment about my software being called Yarn, but after he gracefully bypassed my dumb joke, he described what he was doing, and I realized that Twine would allow me to build the text-adventure game that I already tried to make once — and that failed badly — a game that would let folks play through finding everything they want and nothing they don’t on this ridiculously huge site with all the different stuff that’s on it…

And I started building that game today.

Next post: The Wishbone Conspiracy: 2204 words… AND a scene snippet