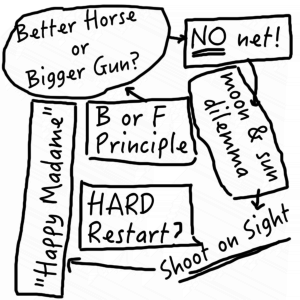 I finished up the write-in revision this morning, and while I was at it, completed the story blurb:

When freedom is silenced, how does it speak?

Ex-PHTF slave WE-39R (This Criminal, from Episode 1), renamed Jex, is part of a team the Longview’s Owner has tasked with finding the meaning behind Bashtyk Nokyd’s enigmatic final diagram. Drawing the most undesirable assignment, Jex and an unlikely ally fight their way to pieces of the truth.

Note the new title. I’d written up one hundred possible titles for the episode, and asked several people to select possible winners from among them. Got back the selections, but Matt read the story and all one hundred of my possibles, and he said, “None of those,” and spent a few minutes in silence. After which he said, “Gunslinger Moon.”

And he was right. It’s perfect.

Editor wins when editor is right.

So. This is the story of the team the Owner sets to the task of figuring out what the hell the philosopher meant with that diagram he drew at the dinner table (shown above).

This episode is the quiet before the storm.

The storm comes in Episode 5: The Vipers’ Nest, a BIG chunk of which is already written.

And Episode 6, for which I haven’t even a hint of what the title might be, will conclude the series.

Oh, right. Type-in revision tomorrow! Should be able to have it finished in one day.