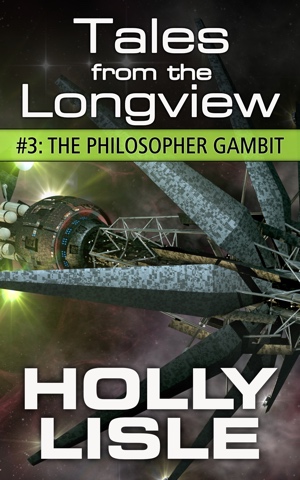 “AS A GESTURE OF RAGE AND PROTEST, I recently bought a pretty girl a fancy dress for her execution. In retrospect, that was an error.” I keep my voice down when I say it.

Across the booth from me, a curvaceous green-eyed redhead gives me the smallest of smiles. “Everyone makes mistakes. For a man in your situation, that was a breathtakingly public one, though.”

Her gaze flicks around the crowded room, filled with rough men and dangerous women, pauses at something back of my left shoulder. I see her eyes narrow, and then she’s looking at me again.

“But if you hadn’t bought that dress, we wouldn’t be meeting now.” She arches an eyebrow. “That gesture bought you…friends.”

I nod. Try to smile, but fear is a tight knot in my gut. That idiot gesture bought me enemies, too. I have twice managed to escape bounty hunters, and now there are rumors the Pact Worlds Administrators have changed the rules. “Latest word through the ping is that the Administrators have contracted with assassins. I’ve been lucky twice, but…” I shrug. “Can you help me?”

At the bar to my left, a fight breaks out—not some rolling, swaggering, fight of drunken punches by two men, but two angry women with knives, moving fast at each other. I have never seen women fight before, and hope never to again. There are no screams, no shouts, just the flash of knives, cries of pain, the thud of flesh against flesh. Blood spatters on our table, an elbow grazes my head.

Bar patrons scramble out of the way as one woman falls dying to the floor while the other stands above her, bleeding, gut-stabbed, swearing under her breath. It is over in seconds. Both women might live if someone tosses them into Medixes, but the bartender and a couple of bouncers are dragging both out into the space station corridor.

My contact isn’t smiling anymore. “Place is going to be crawling with sporcs in a minute. My contact said you want transport, that you can pay.”

“I can pay. But I want to get to…” I almost say the name, and catch myself just in time, “I heard that your ship contacts a certain city.” Those are the words I was told to use. Certain city. That if I were to book passage, I might be able to get there.

She shakes her head. “Our ship never leaves its route. Can’t. Our movements are public record, tracked. We have never been to the certain city.”

“But…” I have traveled under assumed names, met with other strangers, paid thousands to get to this one place, this one moment, for this one meeting. I came here believing that this would be the end of my journey. That after this I would be on my way to safety and to true freedom.

I am risking my life just to sit across a table from this woman my gut tells me is as dangerous as everyone else in this dark and noisy bar. And this is not, as my last contact promised me, my answer. This is simply one more middle point.

“You can book passage with us—no names, no records. I don’t know how you got to us, I don’t know who mistook us for something other than what we are…but we’ll take you aboard.” Her eyes are staring into mine. “We cannot take you where you want to go, but we will not stand in the way of you getting there. You understand?”

I don’t doubt the rumors of assassins. I slapped my name, my presence, and my protest across the faces of every friend I’d ever had in the top tier of Meileonese society when I bought Suzee Delight a designer dress to wear to her execution—and then had a contact slip a copy of the receipt with my signature on it to Danyal Travers. I wanted to let my old friends know that I had not forgotten about them and their criminal actions against their own people. They’d already sentenced me to death…but it was only after I rubbed my continuing freedom in their faces that they got serious about seeing me dead.

I am not going where I want, but I have nowhere else to go.

“Whatever you need from me,” I tell her.

“Passage is two thousand cash,” she said. “Rucets only.”

I nod. I hand her the chit, she scans it and validates it. “Let’s go. Once we’re outside this bar, do not say a word to me or anyone, keep your head down and your eyes on the floor at all times, and stay to my right. Got that?”

I nod. I follow her out the door, down the corridor, realizing that I am entrusting my fate to a stranger vouched for by other strangers—that she could be anyone. Her shipsuit is nondescript—no crew markings, no ship’s name, nothing. She could be an assassin herself. She moves the way I imagine cold-blooded killers move. But I keep my head down, my eyes on the floor. I have come this far. I cannot know that I will be safe, or that I have made the right choice. I can only know that this is the chance I have bought and paid for, and this is the chance I cannot permit myself to lose.

The corridor is crowded, and I am pressed close to the right wall of it. The thin layer of moleibond that stands between me and the death of vacuum is flawlessly clear, and I cannot help but see the black beyond, the splash of stars spreading beneath my feet. For a moment, I see once again the strellita-lit arch of false sky above Oldcity, and I feel a pang of loss. Meileone, my home, is lost to me forever.

I don’t know what my future holds. I only know that it will be far from my past.

“This is Danyal Travers, Voice of the Furies, with Twenty Points: News for the freedom seekers trapped inside the Pact Worlds Alliance.

“Item One: The little men of the Pact Worlds Administration have met again. Minutes leaked to this investigator from their last meeting confirm that the criminals who rule the Pact Worlds are seeking to break another contract, this time with the owner of the Longview.

“Remember, the Longview is the Death Circus ship that carried Suzee Delight to her execution, and that, when the universe screamed for her pardon, let the universe know the Administrators demanded in their contract that if Suzee Delight was not executed, the ship’s owner, all its crew, and all subcontractors for her execution would be executed in her place.

“Now these Administrators have engaged the law firm of Fenga, Ruttquivt, and Challs to lay claim to the Longview, all of Mado Keyr’s incomes and possessions, and all rights to products related to Suzee Delight’s life and execution…

“Item Eight: If you are still trapped inside the Pact Worlds system, be wary of strangers offering to sell you weapons. Rebel sources have proof that slavers are using this tactic to capture new slaves—though how these slavers are managing to travel through Pact-Worlds-guarded origami points without being apprehended remains a mystery…

“Item Fourteen: Well down our list, here’s some good news for a change. The Madrigal system, previously a Pact Worlds Covenant signee, has revoked its Pact Worlds charter and declared its independence…

“Item Twenty: In spite of the ever-increasing bounty on his head, Liberation Philosopher Bashtyk Nokyd has not yet been apprehended—and The Voice of the Furies cheers him on in his fight for individual freedom and rights for every human being…

“…And that’s the Twenty Points. If you have proof of corruption, collusion, or criminality from those who hold power in the Pact Worlds Alliance, start fighting for your freedom. Send your proof securely to Ping Eighty-Eighty-Five, Danyal Travers, The Voice of the Furies.”