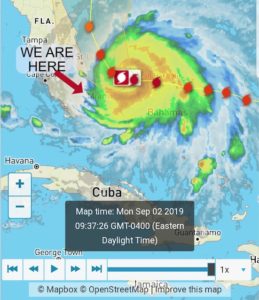 Image of Hurricane Dorian is a cellphone screenshot from WeatherUnderground.com

Imagine you live in a neighborhood where, from time to time during the autumn, roving thugs invade the entire area. They pour into your house and the houses of everyone else in the neighborhood, stick guns to your head, and for a period of a week or more hold their guns to your head and the heads of anyone else who is with you, threaten to destroy everything you own and to kill you and everyone you love — and you can put shutters up on your windows — but if the thugs are serious, that won’t stop them from doing what they’re going to do.

One of three things then happens.

They do nothing, getting bored with their game, and just go away.

They trash some places but not yours, kill some people, but not you… and then they go away.

Or they destroy your stuff, or kill you.

They might come back again several times during the same year. Might just disappear into the woodwork for a while — but you KNOW they’ll eventually be back.

Well, the thugs are in my living room right now. Our sky is gray, it’s raining, and there are intermittent gusts of wind bending the palm trees in front of our place.

I KNOW Hurricane Dorian is supposed to turn.

But you look at the size of that monster, and to the outer bands that are already over us, it’s very hard to NOT think, “Weather forecasters have been wrong once or twice before about hurricanes… and what if they are this time, and what if it doesn’t?”

And even if if does, there’s another one already building out there.

It already is for me.