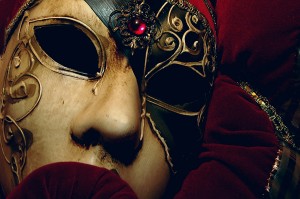 Your own personal Stranger

I was digging through the weblog, trying to remember when exactly I suggested doing the How To Think Sideways course, and when readers voted on that course above all others as the one they wanted next.

And it was here:

Reading over those course ideas, I’m amazed (and a bit disturbed) at how many of them ended up incorporated in How To Think Sideways.

I did not consult that list while I wrote How to Think Sideways. I just wrote what I thought was that one course idea, and used the examples I needed to use to make my points…and somehow almost everything else on that list shoehorned its way in.

The subconscious mind, however, is a tricky, twisty creature—and mine clearly was up to something during the whole seven-eight months it took me to create the first version of the course…and then the many, many months I’ve spent doing upgrades and additions.

Today, I came around a corner and surprised my Muse at work, and it looked at me, winked, and said “Gotcha.”

Next post: SNIPPET: Warpaint (or How Cadence Drake woke me at 3 AM)