How to Revise A Novel

I’m revising my current novel right now, and I got to thinking about what a pain it can be to get the thing right.

When you finally finish the first draft of your novel, the temptation to just print it, box it, and start it on its rounds can be almost overwhelming. By the time you’ve written anywhere from 90,000 to 150,000 words, you can be pretty tired of the storyline, the characters, the plots and subplots, and you’re generally itching to start that new project, too — the one that started creeping into your dreams three or four months ago and that has now become almost an obsession.

But you can tremendously improve your chances of making your manuscript marketable if you’ll take the time to sit down and do one truly ferocious pre-submission run-through.

(For the record, I usually only revise anything I write one time before I send it out the door. My revisions to editorial request add another one or two times through the manuscript. I don’t do five or ten or twenty revisions. At that point, I’d be so stale and jaded on the material that I wouldn’t be any good on it anymore.)

Here’s how I revise a book before submitting it for the first time; this process eliminates a lot of the editorial requests for revision that I would otherwise get, and for those of you who have not yet sold anything, will make it a lot more likely that your book will sell in the first place. There are, of course, other ways of doing this. This is mine. 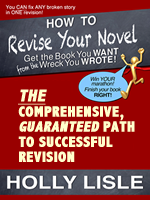 This workshop leaves out MOST of the process. When my daughter asked me if I could go into detail on how I revise, I ended up creating the massive five-month course How To Revise Your Novel: Get the Book You Want From the Wreck You WROTE.

What’s here is true… it’s just .001% of the process, and the result of me trying my best to explain how to revise a novel in the span of one page.