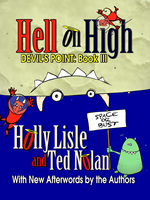 by Holly Lisle and Ted Nolan

The angel Gabriel looked up from polishing his trumpet and almost dropped the instrument to the ground. God stood before him, dressed in orange Bermuda shorts, a Hawaiian shirt with red, blue and green macaws and palm leaves against a vivid fuscia background, navy blue nylon dress socks, and penny loafers with the pennies in. He carried two cameras around his neck—an expensive Nikon 35mm and a cheap Kodak Instamatic—and he wore RayBans and a Panama hat with a red, white, and blue checked band. He had giving his features a distinctly Japanese cast.

“Absolutely. Do you have any idea how long I’ve been working?”

“—Billions and billions of years ago,” God said, and for a moment he sounded just like Carl Sagan, who was currently making himself known in the Celestial Special Events department of Eternity.

Gabriel swallowed. “Yes. It has been quite a while. So when are you planning on taking your vacation, Your Magnificence?”

“NOW?!” Gabriel yelped, and looked around to see who else was listening in. “You’ve got to be joking.”

God was smiling. He wore the silly grin of someone who has heard Heaven’s Celestial bells for the first time, and discovers they’re playing Jimmy Buffet’s “Blue Heaven Rendezvous.” People rarely suspected that God was a big Jimmy Buffet fan. Gabriel didn’t like that smile at all, and he liked it even less when God said, “You aren’t.”

Gabriel thought he might faint. “Then what are we supposed to do while you’re gone?”

God patted him on the shoulder. “Think of this as a learning experience. All of you will do just fine.”

He started to fade from view, and Gabriel shouted, “Wait! Where are you going? When will you be back? You can’t just leave like this!”

“Don’t worry,” God said, his voice growing faint even as he began to shimmer like a desert mirage. “Be happy!”

And then he was gone.

Gabriel shivered and stared around Eternity. The words don’t worry—be happy circled in his mind with the tenacity of bad lyrics tied to a catchy tune. Easy for God to say. The Almighty was on vacation, leaving the angels in charge.

Billie Holiday wrapped up “Billie’s Blues” in the background, and started into a cover of Sara Hickman’s “Time Will Tell” from the Necessary Angels album.

It will, won’t it, Gabriel thought. Time will certainly tell.

Then he tried to figure out what exactly he was going to tell them.