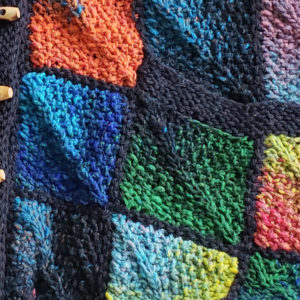 Problem: Not Enough Noro means I have to use a fill-in yarn 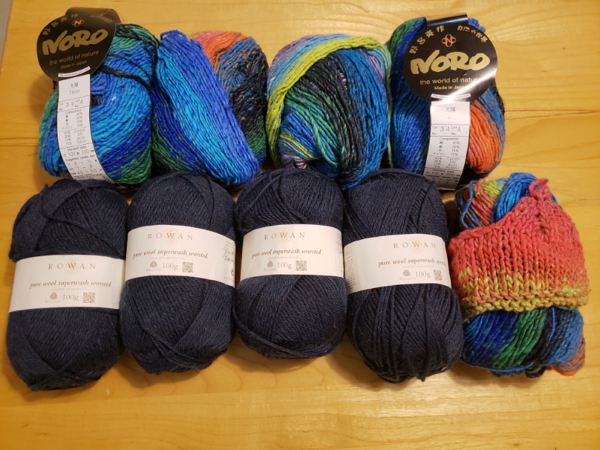 SOLVED: On November 3rd, I finished my Stained Glass Sweater, a project I’d been working on in small pieces since August 18th.

Problem: About two weeks ago (late in the actual season), I discovered that the Diablo 3 season had something I wanted. A Disembodied Hand pet.

SOLVED: Sunday night,I got my Disembodied Hand by finishing the first four challenge levels of the current season of Diablo 3.

Problem: Can I show my readers enough of who the Owner is to actually have them care what happens to him?

SOLVED: Yesterday the comments from my Bug Hunters for The Owner’s Tale, the concluding episode of Tales from the Longview, started coming in. And they cared.

And it suddenly occurred to me that:

have an astonishing amount in common.

My bet here is that you’re going to think I’m nuts. But watch this…

The Common Ground of Knitting, Diablo 3 Seasons, and Novel Writing

They all require grinding.

Not familiar with the concept of grinding?

When you grind, you have a set series of achievable objectives before you that, if you complete them, will give you a reward.

Grinding always includes easier objectives and tougher objectives, and if you’re smart, you do the easiest stuff first and work your way into the more difficult bits, gaining skills and technical prowess (and better armor and weapons, or tools and techniques) as you go so that you can conquer the bigger battles without getting your ass handed to you too often.

The first objective is always simply this… Figure out exactly and specifically what it is that you want to accomplish.

In Diablo, I wanted to win the pet — the disembodied hand that runs around while you’re playing and picks picks up of all your gold so you don’t have to. I love Diablo’s weird pets, and the idea of that hand made me laugh.

With The Owner’s Tale, my objective was to wrap up the entire series and answer the final mysteries, whilepresenting the Owner and having his story and his life matter to readers.

With the sweater, it was to figure out how to use some gorgeous Noro Taiyo yarn in a colorway that was no longer available, and which I didn’t have enough of to make an entire sweater for myself. On August 18th, I came up with the little swatch below, and liked it enough that I didn’t tear it apart to try something else.

August 18: Interesting, workable sweater concept, with Rowan wool worsted to use to fill out the Noro I didn’t have enough of. 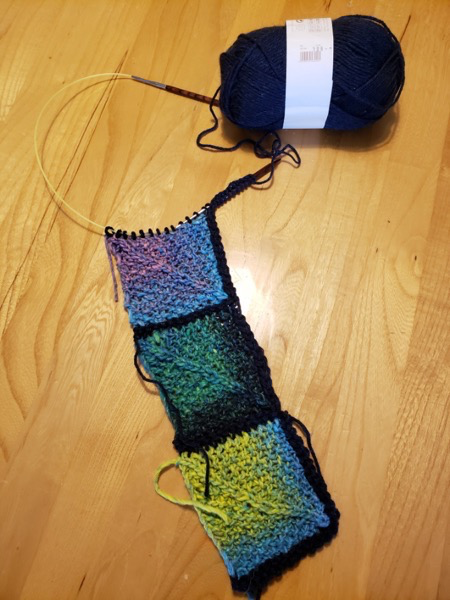 With Diablo, I picked a Demon Hunter (had never played one of those before), and just started playing in the evenings when Matt was playing his stuff. My objective? Finish the Season, earn the Disembodied Hand pet and maybe some of the armor.

With The Owner’s Tale, I identified as my objective that when I’d finished my story, my readers would actually meet the owner — from his own point of view, which I had kept them away from up to this point. And Keyr would show them who he was, why he did what he did, and would wrap of the biggest mystery that has run since Episode 1 — what’s really going on in the Longview? And if I did it right, when they reached the end, they would care what happened to him.

With the sweater, I located a second yarn that went nicely with my bright Noro Taiyo, a nice, slightly flecky Rowan worsted wool that wasn’t quite black, but was almost.

And my test swatch looked like stained glass to me, and reminded me of windows my father built for churches and homes. I thought, yeah, that’ll work. And set my objective as making a sweater for myself kind of like the one I’d made for Becky, only different.

When you finish an objective, you have to know you’ve finish it.

Diablo is great for this. The game has little icons that show up on the bottom of the screen, all gilt-edged and shiny, that tell you, Hey, you did SOMETHING good.

Knitting has stitch markers if you’re working with really big pieces. If you’re knitting modularly (in little shapes that you then knit together into bigger shapes), you just count modules.

August 22nd: One Back Panel 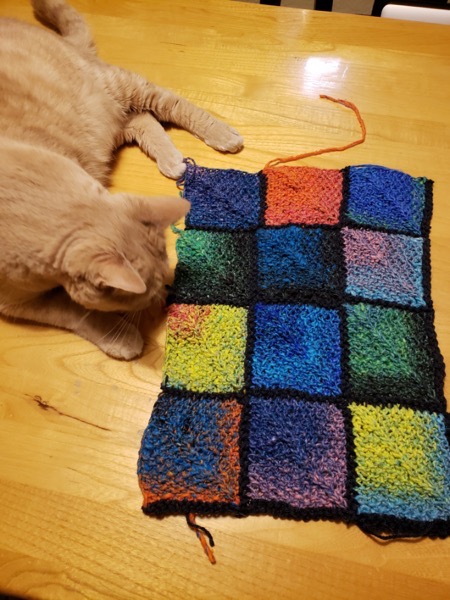 In writing, you count words and scenes, and you write toward discovering your story’s best ending, which is rarely the first one you think up.

Well-chosen objectives have a clear waypoints.

Diablo 3 is excellent at setting this up for the player. You have a series of four groups of objectives that move you to the first big reward. You’ll end up doing the first groups of stuff by accident—just by playing the game. As you clear each objective, you get a bright red badge beside it, so you can see clearly how many you’ve done, and how many you have yet to do.

You get a nice sense of progression, and you get absorbed in going deeper (occasionally looking things up on the Internet) so you can find and conquer the more obscure challenges and earn the remaining, more difficult progress markers.

With knitting, you’re building pieces of a whole, and you try them on as you knit them to make sure what you’re making fits. 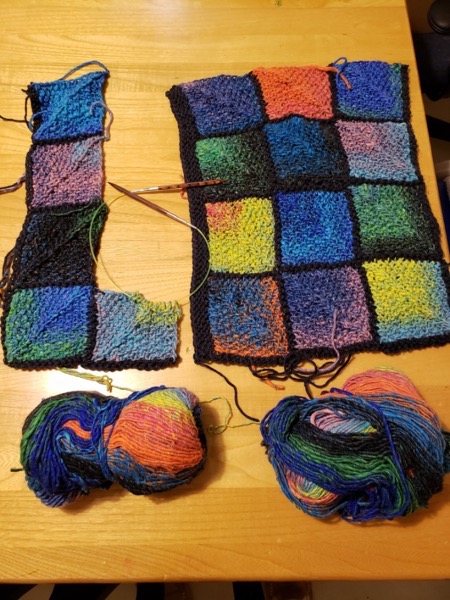 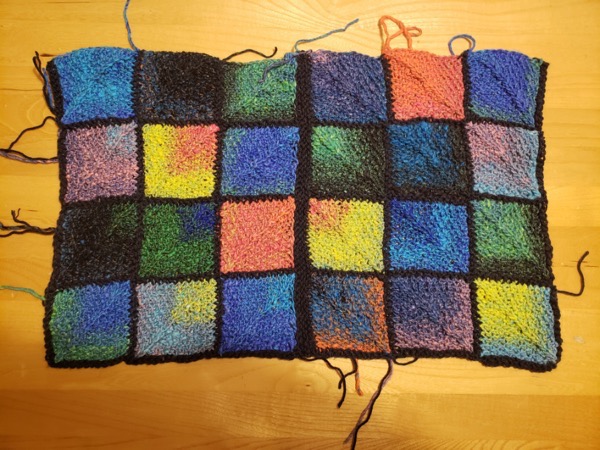 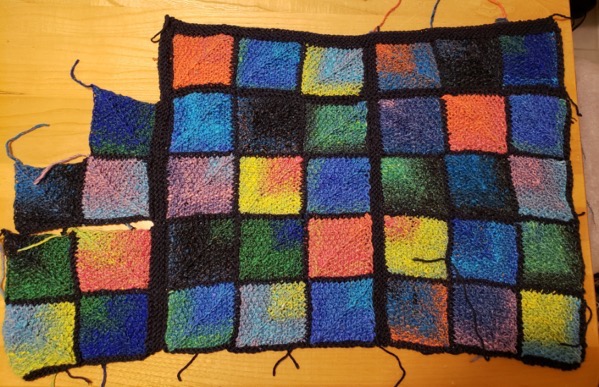 MSU — Making Shit Up — is a technique I use in problem-solving for both knitting and writing fiction. This requires a moment of explanation, and I’m going to discuss this from the knitting perspective.

I don’t do pockets often. I’m sure lots of folks have come up with this way of making pockets in a modular sweater, but I didn’t research “How to make pockets.”

Instead, I thought about what I wanted them to look like, and how I wanted them to work, and then I tried different approaches until I came up with this one, in which the opening for the pocket is created by not joining the modules. 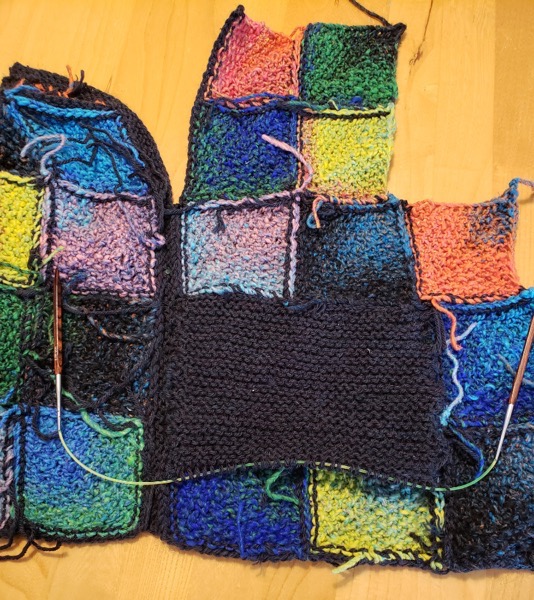 And then by knitting in the pocket liner so nothing is sewn, and so the pocket will be sturdy. I’m sure lots of folks do this — but I get to claim this as my method (what Elizabeth Zimmerman would have called unventing) because even though a ton of other people have probably figured this out on their own, I figured it out on MY own. I invented this process for myself. This is what you do when you like your brain and want to keep it working. You push it to solve complicated problems every day.

Achievable means “If you do the work, you will get the reward.”

This is where Destiny and Destiny 2 are very bad games, and Diablo 3 is a very good game.

Which is why I finally quit playing Destiny.

I’m willing to grind like hell to get something, but I don’t like to have bait dangled over my head with “Yeah, you did all the stuff, but you still can’t have the thing you wanted.” Destiny is like a shitty boss who says, “Guess what? You didn’t get paid this week. But keep working. Maybe I’ll pay you next week. Or never. Mwa-ha-ha-ha-ha!”

Screw that. My time matters to me.

With Diablo 3, you know exactly what you’ll get if you do the specific tasks,and when you complete the last of those tasks, you get the stuff.

But you have to be persistent, because there are a LOT of tasks, and you’re starting out with a brand new, unleveled character that you have to take through the whole campaign first before moving on to doing bounties and other higher-level stuff. But if you play a little every evening (and maybe binge a bit on the weekends), you’ll get your goofy pet.

Then you have more tasks you can play through to get more stuff. I’m willing to work really hard for cool stuff, but I do require getting paid for that work. Diablo 3 pays on time and in full.

In knitting, you have to be persistent, because knitting is slow, and finicky, and you have to do a lot of ripping back and trying new things if you don’t use patterns (I never use patterns — I always just make shit up). But if you stick with it, and knit a little every day, you’ll eventually finish your sweater. And then you have something cool that you wanted.

October 17th: It took me seven tries to figure out
a way to do the sleeves that I didn’t hate,
but with this, I finally came up with something I liked. 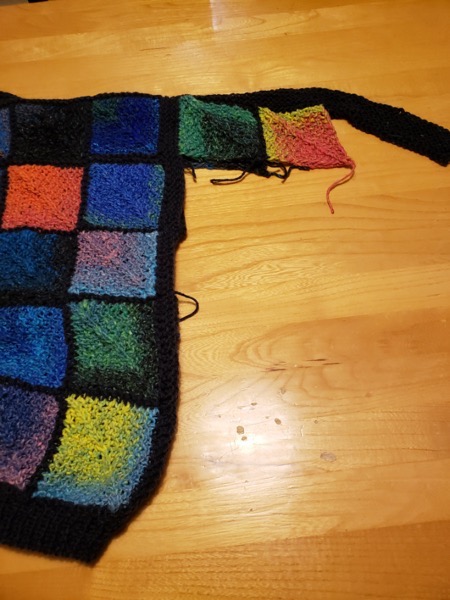 October 23: Here you can see the sleeves coming together…

With writing, you have to be persistent. It, too, is something big made up of bunches of small parts. Tens or hundreds of thousands of words, dozens to hundreds of scenes, possibly dozens of chapters.

And if you show up regularly and do the work, you’ll create the small pieces that make the bigger parts that eventually finish the whole.

You do “X number of words per day” and you make that a number small enough that you CAN hit it every day you write. You don’t keep raising the number. You can write more on any give day, but your low, achievable number is your success number. So that on SHITTY days (and you will have them), you can still hit the low number, can still have a successful day, and can then go curl up on the couch with a good book and a cup of coffee and make Real Life go away for a bit.

Well-chosen objectives have to end with guaranteed success.

You set a goal you can reach, and you work to that goal.

I have my Disembodied Hand, and I get a kick out of watching it skitter around the screen picking up gold off the ground.

I have my oversized, warm, pockety sweater. All the ends are sewn in, the buttons are on, the button band came together perfectly, the Kitchener stitching on the waistband, collar, and cuffs turned out beautifully, and it’s as bright and pretty as I hoped it would be. Now I just need some cold weather so I can wear it. 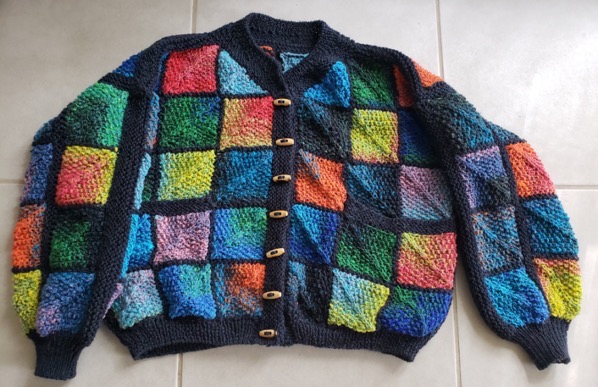 Well-chosen objectives have to matter to you.

I really wanted that hand. It’s gross, but it’s funny.

I really wanted that sweater. The more I worked on it, the more I could see what it could become if I did it right, and I wanted to wear it, to have that little tribute to the part of my father that I liked and respected, and to have something that was just that bright and cheerful and pretty.

With The Owner’s Tale, I could feel the power of the story building as I discovered the owner’s life before he started rescuing slaves on the Longview. I needed to know more about him, needed to discover why he gave a shit, needed to know why, when he got filthy rich, he didn’t just take his money and make himself a god. And I wrote the story I needed to read.

That’s what you’re looking for when you set objectives.

What you need in your life, step by step, with the end result that your life is better in big or little ways.

But if you can identify achievements that matter to you, and can build out the steps that you can take to reach goals you can achieve on your own, and if you’re willing to then grind— to do the work, to show up in your own life and put in the effort and the focus — you can have that.

Previous post: Completed revision of The Owner’s Tale today – Next big step to getting back to Moon & Sun