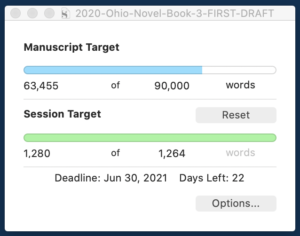 Last week, the story hit some pretty rocky shoals, and I had to do a lot of backing and filling.

Today… none of that. The backing and filling left me in a really good spot, and I found my characters and the conflict today the second I sat down, did a scene that started in a direct and practical fashion, and then had the joy of watching it gain momentum on me, at the end turning into something sort of poetical and beautiful.

And because my older son was trying to stay awake while driving home, I read him what I’d written, and he loved the parts of it that had gone poetical. (No actual poetry — just a nice metaphor spun out in a conversation between two women about hope, and the future, and the people you might someday meet.)

Day One of Summer of Fiction Writing 2021

For writers, the SOFW 2021 event starts at HollysWritingClasses.com today. It’s a free event and free membership), and if you write fiction (or would like to), you’re invited. Full details are available at the site linked in the header above and in the first line.

I’m already playing, as are a lot of other folks — a lot of other writers are also joining in. And I’ll just state here that the event will fit itself around any writing you’re already doing — you don’t have to start a new project, or write a whole novel over the three months, or fit a schedule set by anyone else.

My objectives, just to give you an idea, are to write five days per week, hit 1250 words per day, and come out the other end with about 75,000 words of first draft (which will have me finishing up Book 3 and starting Book 4).

In other words, doing exactly what I was already doing, but posting progress, encouraging other players, and answering questions other writers might have during the event.

I’ve provided a ton of free resources (and a bunch of paid ones if you already know you want to write fiction for a living and want to use the summer to get serious about that).

But mostly, this is a bunch of writers encouraging each other, hitting their goals, and then hanging out and talking shop, and having a really good time. I hope you’ll come hang out, too.