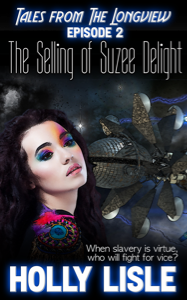 The second edition of Tales from the Longview, Episode 2: The Selling of Suzee Delight has entered distribution today.

This is the sequel to Tales from The Longview, Episode 1: Born from Fire (previously released as Enter the Death Circus), now available permanently for free.

I’m hoping to have the third episode, The Philosopher Gambit, ready to publish in two weeks. It’s been sitting on my hard drive, almost finished, for about two years. All I need is the first chapter from Episode 4: Vipers’ Nest to put in the back.

Everything else is done. Doing that doesn’t count as fiction time, because I’m writing the entire Longview Series as the demo for my How to Write a Series: Master the Art of Sequential Fiction class. And I need to get the episode written so I’ll have my demo for one of the later class modules.

It’s nice to finally be seeing some progress.

Next post: The Philosopher’s Gambit, Episode 3 of Tales from The Longview, is live!

Previous post: Born from Fire: Permafree release of Episode 1 of Tales from the Longview