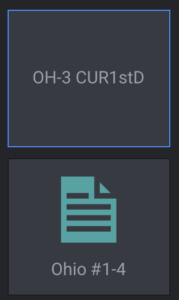 In the little image above, you can see the blue-outlined box with OH-3 CUR1stD in the middle.

Enigmatic, maybe, and not very informative. Until you see them in context and understand what a big deal this is.

If you’re a non-nerd reader waiting to read the Ohio Series when it comes out, you can read just this bit and get the good stuff.

OH-3 CUR1stD in the image above stands for Ohio 3, Complete Unrevised First Draft. It’s moved next to its two siblings (show in the big image below this section), where it will wait until I revise the entire pile of five novels in ONE pass.

Immediately below it in the image above there now sits a new blue document link. Ohio #1-4.

I’m building a NEW outline for that book today, because I broke all the old outlines when writing Ohio 3.

I’m hoping to start writing Ohio 4 on either Monday or Tuesday of next week.

If you are a reader or writer NERD… keep reading. From here on out, I’m talking about the BIG picture, from which I grabbed the little picture. 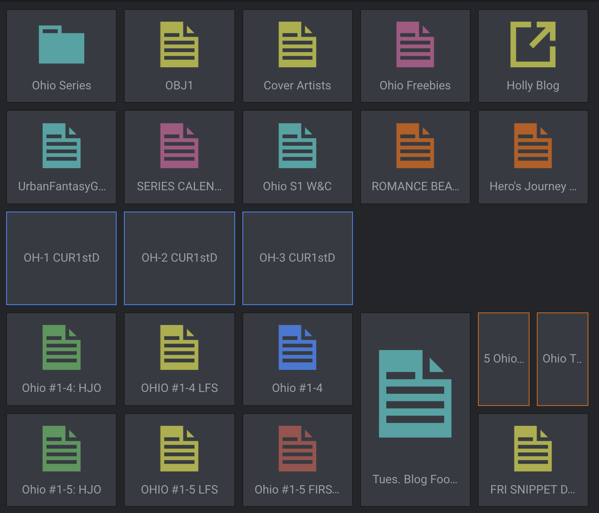 This is the current organization of my fiction process and writing documents, aided by FREETER, the software that makes all the spiffy boxes, each of which is a link to a folder, a document, or something that I have to do each day, like go in and edit my newest blog post.

In the big image above, you can see two rows of stuff that I’m using to build the Ohio Novels. (Or will be once I’m that far.)

My link to my series storage folder, top file. Inside that folder, I have all the worldbuilding, all the notes to myself, all the character development, the books… everything.

Then there’s OBJ1- which is my list of objectives for the first five Ohio Novels (“first” assumes they will do well enough to warrant a second series. If they don’t, there will not be a second series).

A list of cover artists I might be able to afford when the time for cover art comes. Then a cluster of ideas (at the moment) for freebie Ohio stories I’ll write once the series itself is complete, revised, and with Matt for editing that folks who sign up for my pseudonym’s mailing list will receive.

The one-click link to my blog — it’s faster than typing.

Stuff for my UrbanFantasyGirl email list (empty at the moment — that list doesn’t get much love until all five books are done and revised, when I can start sending out teasers and goodies).

The series calendar… built around a real calendar (and a real year) so that I don’t make stupid date mistakes, so that I can track time and pay attention to changing seasons… stuff like that.

Also so that (SERIOUS NERD ALERT) I can make sure that I get sunrises and sunset times correct for specific days — which is important, but saying why would be A) a small spoiler, and B) massively geeky. (Warned ya. Hah!)

In general though, and not giving anything away, each of the books in the first series takes place over a couple of weeks in one month, and each book contains one complete adventure, as well as a couple of bigger stories that will only be complete within the five-book series.

The OHIO S1 W&C is my complete list of world conventions and the characters in the book. It’s very, very easy to just keep throwing new characters into new books. It’s much harder to keep track of existing characters and make sure they remain in all the books and experience changes and growth, and don’t just vanish into the ether because you forgot to write them.

(VERY easy. I have not yet forgotten the sting of forgetting to write Danrith in the rest of Fire in the Mist, or at all in Bones of the Past and Mind of the Magic.)

Romance beats are one form of story structure. Hero’s Journey is a second.

I’m working with both.

Finally, the three (YAY, THREE) completed first drafts, and then the last two novels, and their hero’s journey outline and Line For Scene outlines.

But of which are going to have to be redone before the writing starts, because while I’m writing, I constantly play “beat the outline”, trying to build something better in the story than what I already figured out.

Which means all the old outlines for later books become useless.

But if I don’t have the vision of an entire story from book one through book five sitting in my head, complete with pretty good ending, and a lot of nice twists… there’s nothing for me to beat.

So all the work I don’t use has a real and essential purpose. If I don’t have “pretty good” and “not too bad” staring me in the face as I’m writing… I don’t have anything to fight, or anything to beat.

Next post: Deadline set for the first draft of Book 4