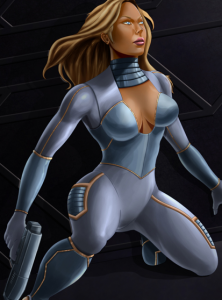 Cady in Hunting the Corrigan’s Blood

My mind twisted like a pretzel as I started working my way through the Law of Unintended Consequences while writing Cady and Badger in Hunting the Corrigan’s Blood. People were trying to kill her, her employer was overpaying her for reasons she didn’t find entirely convincing, and her built-in spy-cam had given her information that only made everything else more confusing.

Enter some new information that REALLY fouled things up…and an innocent bit of deception on Cady and Badger’s part that is going to have a hellish backlash.

I keyed in the link to the navigation deck, and Badger’s face floated in front of me. “Any luck?” he asked.

“A fair amount. I have an idea on where we can start looking for our client’s ship. We need to get ready to run. Meanwhile, have you gotten any information on the holos?”

“The strangest information of all,” he said. He looked weary and frustrated. “Whoever the three men were who came after you, they had the best security I’ve ever seen.”

“Because according to all official records, none of the three of them have ever been here.”

“Never. I’ve run the worm through every databank on Cassamir Station, and pulled the data stream from every security monitor. Hell, I located the security cam that shows the view of you and Peter Crane having lunch. It also shows the table where the three of them sat while you ate.”

“You don’t understand. They aren’t at the table.”

I felt my mouth drop open; I knew I looked like an idiot. Still, no one underrated the magical art of making yourself disappear more than I do. “You mean someone has completely cleared them out of every record in the station?”

So the three men who had killed Sarah and who had nearly killed me had someone on Cassamir Station covering up for them. Someone well-placed enough to gain access to every security file on the station that included the men, and talented enough to erase the men from every record without leaving signs of tampering. “Could you do that?” I asked Badger.

I nodded. I couldn’t have done it either. “Connect into the VeCRA system and see if you can find any records on any of the three of them there. If they don’t show up in VeCRA databases, we can spread out further.”

VeCRA is the Verzing Community Regulatory Agency, the bureaucracy that keeps tabs on the loose coalition of settled planets in this sector of space. The other sectors have their own agencies that work with VeCRA; and the non-allied planets usually have their agencies (and those may or may not cooperate); and the fanatical confederacy, Oeoslong Legion, has its slew of agencies. Even if we searched through all of those databases, we still might not find our people, because settled space is too damned big for bureaucracy to keep under its thumb. There are scores of settled planets that opt for anarchy–they don’t keep records; they don’t pay dues; and they don’t answer anybody’s questions unless they want to. If our thugs were from one of those places, we would probably never run them down. Still, we had to look.

“Before you start the VeCRA search, though, I need you to make me some fuzzy, ugly digital two-D’s from the doppler images, and I need them fast.” I told him the shots I wanted, then added, “Mess them up some when you print them. Make them look like we got them from a … oh, a Clarion MicroSure-Shot digicam, and make them look like we’ve enhanced the hell out of them.” I paused for a second, thinking. “Be consistent with the angle. Something that someone could have obtained from long-range, or at least from outside the dining area, if that’s the best we can do. I have an idea; find someone in Ferlingetta who could have taken them, and create the series from that person’s viewpoint.”

“Send them via Gen-ID to Peter Crane as soon as they’re done … and time is important, here. I told him they already existed. While you’re doing that, I’ll file our flight plan.”

Previous post: Struggling with an Alternative for PayPal Users