First the time, then the weather. THEN the words. 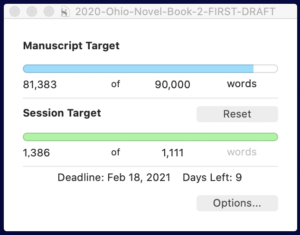 This morning, I dreamed a digital clock, which showed me 7:31.

I woke up. Immediately checked the time. It was actually 7:41.

My brain is ten minutes slow…dammit.

Anybody still have your copy of The Brand New Human’s User Manual? If you do, could you give me the steps for resetting my brain clock? At least my software has updated to the digital clock, but I’m pretty sure my manual got lost in a move.

Right now, outside it’s 16℉. According to my weather app, we’re not going to go above freezing for the rest of the week. The last time I saw weather like this, I was nine years old; I lived in Alaska, three miles upriver from Kwethluk, in an enormous 3-story log-cabin boys’ dorm where my folks were dorm parents; and we heated the place with wood, which my father and the bigger boys in the dorm went outside and cut.

The entire compound had been, I suspect, a cold-war US listening post — though nobody tells nine-year-old girls this sort of thing. You have to piece that stuff together by yourself from context.

The compound still had a flag on one of the walls, though, that said Nunipistinguk — which in the local Yu’piks’ dialect probably meant “Those Dummies Built a Basement in Tundra.”

(Every time the river rose over the banks — which was a recurring spring-thaw event — the basement flooded.)

(As a longish aside, because my one-room, five-grade school up in the boys’ dorm attic, was in English and the kids there were all learning English, the only thing I ever learned to say in the local dialect was “I want another cup of coffee.”

The spelling is wrong, but I learned it phonetically. It sounded like “jolly goofamick gootooden.” I was nine back then, and nobody sane would have let me near coffee. (Votes are still out on whether someone wound as tight as I am should be drinking it even now.) So I never got to try the request out in real life.

(If you know any Yu’piks, ask if that’s what it actually means. If it’s profanity someone thought it was funny to teach a kid, I apologize. I much prefer to make my profanity intentional.)

Oh. And I still remember the word gussak. Which, as the nine-year-old outsider, I got called a lot by the other kids. It’s derogatory. It derives from the word Cossack.

Anyway, the extreme low temperatures we’re moving into in the north and east, if they hold, will be the most extended period of deep cold I’ve experienced since Alaska — so if you’re up in the Big Purple Belt of coming freezing temperatures, here’s some useful information I learned when I lived on tundra.

The military guys — who I assume built and operated the place before the US military decommissioned the site and sold it to the Moravians — had an Arctic thermometer outside the window of what was, to me, the boys’ dorm-parents’ suite (probably officers’ quarters) which was situated on the floor beneath the boys dorm (certainly barracks). Anyway, I wanted to go outside to play, in spite of having seen the temperature.

So my dad walked me over to the door, opened it, threw the contents of a cup of hot coffee he’d been drinking over the steps down to the boardwalk — and the liquid exploded with a crack like a shotgun, and turned into brown snow.

What I Learned: Things made out of mostly water don’t go outside in weather like that. Since a lot of us are about to have weather like that… be careful out there. Fingers, toes, and noses don’t grow back.

Today, my fingers flew. I got 1,386 words — significantly over my must-hit objective of 1,111. And I found out something so very, very cool about what caused the invisible car. It wasn’t something I’d planned, it wasn’t something I’d even imagined, but when the words started rolling, it just rolled out, and it gave me another scary thing to drop into my little Ohio town.

Also, I’m creeping toward identifying a character who’s going to be very important in Book 3. I’ve known all along who he really is, but it’s one of those things that I’m dripping into the stories a bit at time. And today, I discovered something new about him.

Excellent Monday, and I’m very happy with the results.