First snow in 30 years, and huge strides on the Dead Man’s Party revision 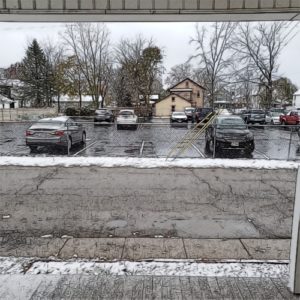 We knew yesterday there would be snow today.

I made Matt promise to get me up when it started — and around 4AM, the snow began. (He was editing someone’s novel at the time, and he does that best when the house is quiet and he has it to himself.)

And all three of us went out onto the front porch in the cold, just wearing our inside clothes, and for a few minutes we let the cold and the snow bite into us and bring us the ultimate expression of this season that was brand new to Joe, and which had been lost to me for the last thirty years.

We had one snow in North Carolina when the two older kids were little, and I took them outside in that so we could build snowmen and I could drag them around the street on a sled we only ever got to use that once.

Got a TON done on the revision of Dead Man’s Party this morning (working four straight hours because you lose track of the time will do that for you).

Some pieces of the beginning of the story connected for me, and made what’s going to be the new middle a helluva lot darker.

The world itself is pulling in tighter — fitting together better. I love this book in spite of the fact that it keeps trying to turn into a series on me.

Dead Man’s Party is and needs to be a one-off. It doesn’t fit into my Ohio universe, and it doesn’t need to leak into its own larger world.

But I do love the damn thing, in spite of its expansionist tendencies.

So… with fiction done for today, and having gone WAY beyond my planned page count, now I’m starting into wrapping up the upgrade of Lesson 1 of HTRYN.

It’s taking longer than anticipated. But that happens to, and the final class will be worth the extra effort.

Onward then, while happily at home with snow.

Next post: The New Year, My Ohio Series and the Hero’s Journey