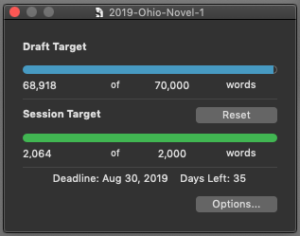 I did not expect to finish the first draft today. Thought it would take me a couple more days to get there, but while Becky and I were running ten-minute work sprints together, what had to be in there just clicked, two complete chapters flew off my fingertips, and all of a sudden, I have a done first draft in my brand-new Urban Fantasy world.

I wrote it using the same process I teach in How to Write a Novel, I had a blast doing it…

And now it sits in a corner of my hard drive for a minimum of one month while it cools down.

Because I need to NOT be wildly in love with it when I do the read-through. I have to be tired, and grumpy, and bored, and wishing I was someplace else. In THAT frame of mind, the good stuff with hook me in, but I will be unable to make excuses for the bad stuff.

But before I put it away for the requisite month (and possibly a bit more), I have the Friday Snippet for you.

Now here I was with a cookie junkie who’d just heard there was a new dealer for his long-lost favorite drug, looking at me with eyes that were shining with need, that said he was jonesing pretty hard.

“I could get you the ingredients so you could make them,” he said. “If you told me what they were.”

“Didn’t Grandma give you the recipe so that you could learn how to make them yourself?”

I was watching him. I work the streets, I know what addiction looks like, and I was seeing a guy who’d gotten a hit of something that had sunk hooks into him and dragged him out on a cold, mean day to a dead woman’s house in search of cookies. Nobody does that.

Only the look people get when you’ve pulled them over and they think they’re about to pull one over on you was on old Mr. Yeager’s face, and that cop sense kicked in and all of a sudden I knew this wasn’t about cookies. It was… but there was a lot more here, and for some reason I didn’t know, it was important.

So this was something else. Something was wrong with my picture.

When in doubt, poke the problem with a stick.

“I’m not going to be baking cookies here,” I said. “I’m just going to be going though the attic and the basement, clearing and cleaning, and then I’m going back home.” When I said the word home, it sounded like a lie in my ears. No matter. I was watching his body, watching his eyes.

And I saw a whole lot of panicked crazy go skittering beneath the surface. “Could I buy the recipe from you?” he asked.

The answer to that question came out of my mouth unbidden, instantly, like someone had programmed it there. “Old family recipe,” I said and shook my head.

And he hung his. “That’s what she always said, too.”

And though I could not understand what made me do it, I grabbed my metaphorical stick a little more firmly, and said, “Tell you what. Why don’t you bring those papers by the house for me so I can look them over while I’m cleaning. If you do that, I’ll think about making some more cookies.”

When it came out of my mouth, I knew it was a mistake. No lawyer would say yes to that. There was no guarantee, there was no promise, there was nothing to pin down. It was an utterly one-sided deal.

And that gut thing I had going said, Ding, ding, ding. We have a winner. Whatever Mr. Yeager is, he is not a lawyer.

Next post: Dead Man’s Party — The Write-In Revision is done.

Previous post: The Ohio Series — 2842 words, and a series-anchoring question