Fire in the Mist 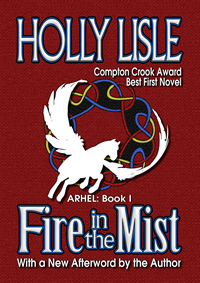 Fire in the Mist

CHAPTER 1 — A Pox on Bright

In front of a fieldstone cottage, on a crisp spring morning, Risse Leyeadote and her leggy, dark-eyed daughter, Faia, hugged each other goodbye.

Faia pulled away first and grinned. “I love you Mama. I will see you soon.”

“Such a hurry. My youngest daughter cannot wait to abandon me for the flocks and the fields.”

Risse laughed, then held out a wrapped packet and a necklace. “Take these, Faiachin. I have more than enough jerky here to get you to the first of the stay-stations, and I have finished the work on a special amulet — added protection against wolves. And I am sending my love. You have your erda?”

Faia nodded at each item on her mother’s list until finally she burst out laughing. “Mama! How many years have I been taking the flock upland? I have everything I need. I will be fine, the sheep will be fine, the dogs will be fine, and I will see you in late summer with a nice bunch of healthy lambs and fat ewes.”

Her mother smiled wistfully. “I know, love. But it is a mother’s job to worry. If I did not, who would? Besides, I miss you when you are not here.”

Faia’s face grew serious for a minute. “I always miss you, too, Mama — but it will not be forever.”

Her mother nodded. “Have you said your goodbyes to Rorin or Baward yet?”

Faia caught the conspiratorial inflection and winked. “To Rorin, yes. Last night. Baward is going to meet me at the Haddar Pass pasture in a month, and we are going to — ah, graze the flocks together for a few days.”

“Are you, now?” Her mother smiled a bit wistfully, remembering long summers in her own youth spent “grazing the flocks” with one young shepherd or another. “Remember to use the alsinthe, then. Well, I’m glad you aren’t going to be up there alone the whole time. Really, Faia, there seem more wolves than usual this year. Do not forget to set the wolfwards. Not even once. Remember, Faljon says ‘Wolves need not knock at the door that’s open.'”

Faia hugged her mother again, then whistled for the dogs. “I know, Mama. I know.” She hung the brightly colored chain of the silver-and-wolf-tooth amulet around her neck and tucked the jerky into one of the pockets of her heavy green felt erda. “Love you, mama.”

“Love you, too, Faiachin,” she heard her mother call when she was halfway down the slope to the pasture.

Faiachin, Faia thought, and winced. Sometimes she still thinks I am five years old instead of nineteen.

Chirp and Huss, black-and-white streaks of barking energy, were under the fence and hard at work before she could even get across the stile. They needed little direction for her to pack the sheep into a nice tight bunch and get them moving to the gate. Diana, the old yellow-eyed lead goat, knew the routine too. She trotted up to Faia and stopped. Faia put the supply harness on her, and checked to make sure the bags on either side were securely attached. The bags held emergency rations for Faia and the dogs and coins for the stay-stations. They also made Faia’s pack lighter, and she was grateful for that.

Faia scratched the goat behind the ears and tapped her once on the rump with her staff to hurry her to her place at the front of the flock. That done, the flock, the dogs, and she moved onto the narrow two-rut cart-path that would dwindle to a dent in the grass by the time they got to the highlands.

The sheep, their bellies already starting to swell with lambs, looked oddly naked after the shearing. They trotted after Diana while Chirp and Huss ran vigorously at their heels, nipping and barking and otherwise trying to demonstrate to Faia that they were the only reason the sheep were going anywhere. Faia suspected a fair amount of the show at this point was just because the dogs were so damned glad to be heading for the highlands again.

She started whistling. The tune was “Lady Send the Sunshine,” but she thought up some words for the chorus and switched abruptly from whistling to raucous singing.

“No damned shearing
No more carding,
No more spinning
And no dyeing!
No more weaving
And no sewing —
Flocks must to the uplands go.”

She liked it enough that she trilled it a few more times, getting louder and louder with each rendition, until with her last chorus, she threw in some silly dance steps with her brass-tipped staff as her partner.

The trees that lined the lane arched over her head, blossoming or barely greening; spring smelled fresh and earthy and new; and, Lady, it is good to be on my way and free! was the thought foremost in her mind.

At the top of the first hill, the trees were cleared and she turned to look back at Bright nestled below her. At her own house, which lay nearest her point of view, a wisp of smoke rose from the chimney. Further back, the smith’s forge was already going at full blast, and she could just catch the steady “clink, clink” of the smith’s hammer on the anvil as it drifted across the distance. The littlest children played tag in the cobblestoned street; their older sibs helped mothers and fathers with the serious work of readying the plows and harnesses for ground-breaking and planting. She could see Nesta shoving round loaves of bread into the tall stacks of ovens — an older relative of those loaves rested in her pack, along with some cheese from Nesta’s sister, Gredla.

She smiled. Home, wonderful, home — where just at the moment, unfortunately, everybody was busy as birds with nestlings. Thank the Lady for giving her the gift of tending; if it were not for that, she’d be home doing the dull labor, like tilling, or planting, or pulling weeds, and some other lucky soul would be heading for the hills for the summer. For, thanks to her magic with flocks and dogs, ahead of her lay the upland pastures. There she could dally about and play her reed-flute and watch the stars and admire the newborn lambs when they came. And cloudgaze nearly to her heart’s content.

The flock trotted onward and she blew Bright a smug little kiss and hurried after them.

Risse watched her youngest child depart and felt a special pang of maternal longing. Nineteen years old, tall, strong, and beautiful, Faia was everything she could have hoped for in a daughter, and more. In spite of Faia’s heated arguments to the contrary, Risse was sure there would be special young men soon; not the current casual lovers, but men Faia would want to have children with. And Faia’s life would change as she had to accept responsibility for babies. She would have less time to wander the hills, less time to play with her dogs. Risse tried to imagine her daughter with children, and came up with a mental picture of Faia with beautiful babies swaddled on her back as she bounded across an upland pasture after her sheep. The older woman grinned. it was actually the only way she could imagine her youngest with children.

She will be such a boon to the village — when she grows up and gets her father’s wayfaring ways out of her system.

There was more to Faia than stubbornness and independence and wanderlust, though, and Risse worried about that, too.

She has more of the Lady’s power than I have ever sensed before — even if it has not surfaced yet. She’s like a river — deep and quiet and unbelievably strong. I just wish she had more interest in exploring her talent — the Lady does not give gifts in order for them to be wasted.

Risse shrugged her anxieties off. She was having plain old mother-worries compounded by the fact that this was the last of her four children to grow up. Those worries, added to her “wolf-worries,” were giving her the worst case of jitters she’d ever had. Still, life was dangerous. She carried memories of packs of wolves, sudden snow-squalls, avalanches, big mountain cats, and crumbling mountain paths from her own summers spent with the sheep. The highlands posed threats even to smart, cautious, experienced shepherds like her daughter. She hoped Faia did not run into more trouble than she could handle.

The amulet should help. I spent enough time and energy on it. If she finds out what it really does, though. ..

Faia’s mother shook her head ruefully. Faia’s independence was legendary in Bright. Faia asked help from no one — never had, even as a tiny child, and Risse figured, probably never would. So Risse had done a thing she considered slightly sneaky. She made a link between her and her daughter, which would let her know if Faia needed help without having to wait for Faia to ask.

The amulet would do exactly what she’d told her daughter it would. It would ward off all but the boldest or most crazed of wolves — two or four-legged. But it would also carry a distress message from Faia to her mother, who could then summon help. There’s a chance Faia will sense the link, Risse thought. It wasn’t likely. Faia rarely heard — or felt — anything that she didn’t want to hear. Besides, it was a chance Risse had to take. Her nerves screamed with the possibilities of disaster — wolves, her dreams said — and the signs of wolves were heavier this year than they had been in a decade. She had an uneasy feeling about them.

Risse had learned to trust her feelings.