Finished Vipers’ Nest… Until I didn’t. 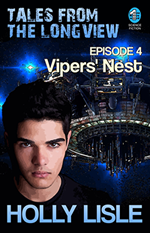 Sometimes you finish a book and you know you don’t quite have it.

I’d done my short version print-out, read-through revision of Longview 4: The Vipers’ Nest. Finished the story last Tuesday with 40,000-plus words, which made it officially a novel.

But back of the mind said, Don’t say anything. Not yet. You don’t have it right yet.

So I just sat on it, created a copy for my husband, and gave it to him the next day.

Matt read it. Since we got together, he’s been my first reader and content editor. He’s really, really good.

And he came back with the single comment that changed everything. “You’re trying to cram three books into one story, and this one has no single main character.”

Then he did the second thing he does. He asked me a question. “So how does Bashtyk Nokyd relate to the game?”

And I saw the answers.

So I’m going back to do a complete overhaul.

I’m going to be ripping out two thirds of the existing chapters to put in the NEXT story (or two), and drilling down to the main character of this story, who was also the main character in Longview 1: Born from Fire, (the guy on the cover) and I’m building out the tie between him and the way Bashtyk Nokyed played a video game to figure out how to save Settled Space.

Or at least the people who want to be saved.