Fighting with Myself — my next week or two, and the process of figuring out the rest of the series.

Today and for the next few days, I’m going to be writing five provisional synopses.

What are these, and why would I write them?

The way I write, I have an outline — but it’s very, very light.

Each chapter (which can include multiple scenes) receives one sentence of no more than 30 words to cover the movement of characters through conflict in that part of the story, following the PACTS formula.

Or, in story sentence form, Protagonist versus antagonist in a setting with a twist.

This is great in that it allows me to never write a scene in which a character is sitting at a table thinking (frequently whining) about how shit life is.

This is bad in that my characters, in the heat of engaging in interesting action in exciting places, frequently decide to take the story into their own hands, and do things I didn’t plan — and because my characters are both fragments of me, and fragments of things they pull out of the damned ether, their actions can sometimes shock the hell out of me while being worlds better than what I’d planned.

(Occasionally, they kill off someone I love… but I’ve already told that story.)

But back to the Story Sentence process, and two necessarily vague examples of how fighting my Line-for-Scene is making things challenging for Book 3.

1) My MC (main character) and her cat went out to meet with an adorable live teddy bear who was supposed to be important later. The teddy bear was lying to me about what he was doing there, however. My main character saw through his lies, and dealt with him based on who he really was rather than who I’d believed him to be, and a major plot point to a part of the world I thought I understood went sideways.

2) In the very first scene of the first chapter, I’m suddenly writing about trying to save a guy I really didn’t like when I first met him. It was a good scene, and I was happy with it. Then Mr. Unlikable showed me who he really was, and the price he’d paid to become that guy, and all of a sudden I fell in love with the little bastard. Was sitting there with tears running down my cheeks, knowing that he isn’t a throwaway. Instead, he’s a primary character throughout the series — and one of the most unlikely heroes I’ve ever written. So right at the midpoint of the novel where I met the real him, (and where — in general — you known what the story is about for 45,000 words or so) the ENTIRE focus of the second book changed from being about a different character to being about him. So all the shit I’d planned for that OTHER character is being moved around, and will have to be spread in pieces through the entire five books.

I will note that it’s entirely possible to write to a strict outline and follow it.

I will also note that I have never successfully done this.

I’ve always fought against the outline, because if I already know what’s going to happen as I’m writing, in the back of my mind where the fiction lives, that story has already been told and there’s no point telling it again.

However… I do have to have some big, planned events in place. Stuff that the rest of the story can build around.

For the rest of this week, and maybe some of next week, I’ll be going through and building summaries of what I’ve done in the first two books, picking out those big planned events and deciding how to use them in the next three books so that they fit…

And then, when I think I sort of know where I might be going, I’ll write 30 PACTS sentences (one for each chapter) into the line-for-chapter outline for Book 3.

There is NO DAMN REASON to try this process yet for Books 4 and 5.

Because Book 3, like Books 1 and 2, will turn out to be almost nothing like what I’d planned — but will be all the better for me having to fight the outline to come to the better fictional truth that’s living inside it.

And SOME TECHIE STUFF for FICTION WRITERS

I use Freeter Pro to keep my projects where I can find them. The screenshot below is the current state of the Ohio Novels. 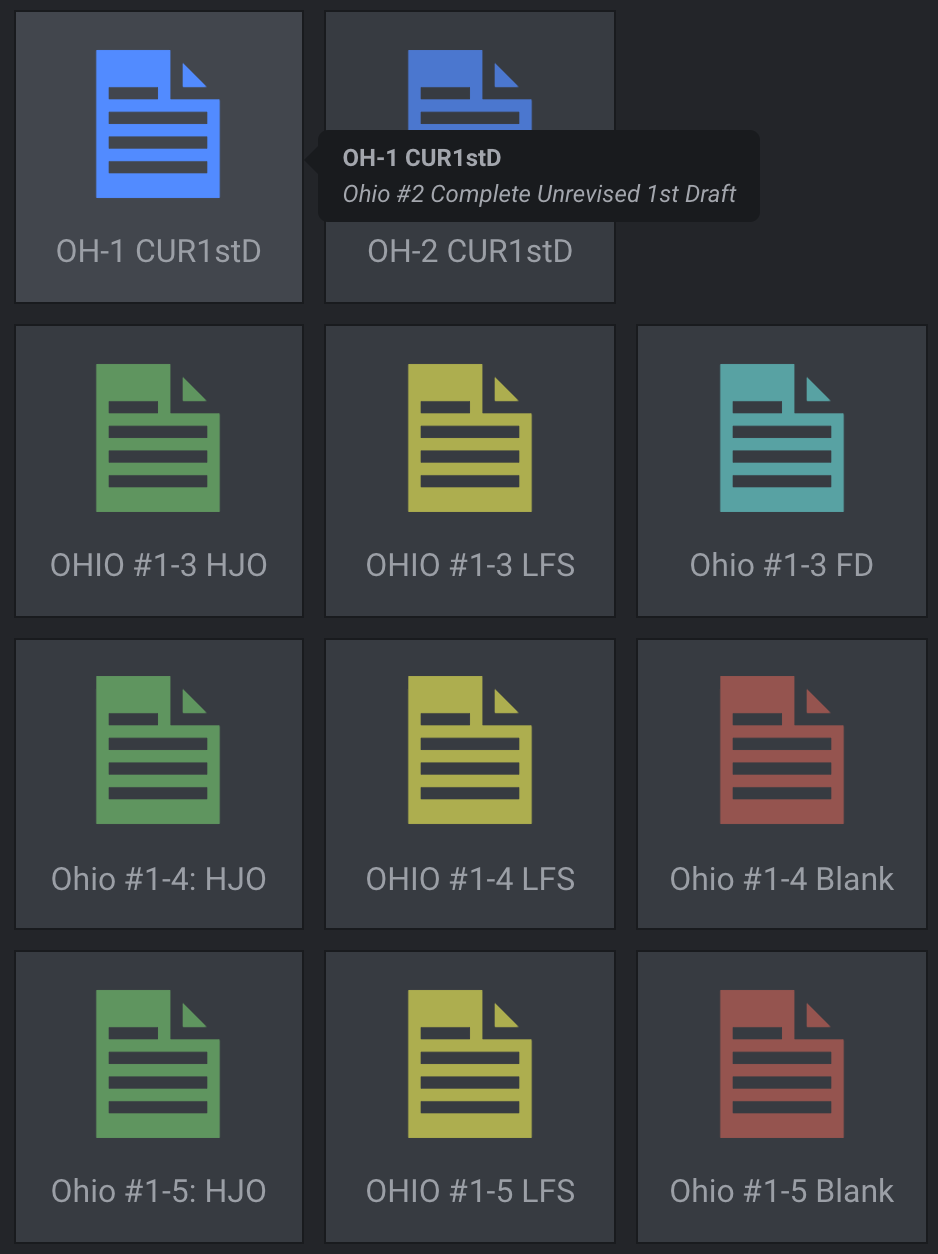 The two books at the top are Ohio 1 and 2, which are currently in Complete Unrevised First-Draft State.

With a series like the one I’m writing (which is unlike any series I’ve written before) I discovered that revising each book as I finished it was pointless. I’ll have to know the ending before I can revise the beginning.

In this project, I’m essentially living in the non-magic version of the world, so I don’t have to draw maps — but I’m discovering the physics of the alternate universe as I go — and while I know the magic rules for the story, and a lot of the critters, and some important characters, each of these is bringing new parts of the universe to me as I write.

I just met Crazy Tree yesterday. That was a shock, lemme tell you.

Having Freeter, however, lets me keep this whole project and all its interconnected pieces carefully labeled, and just one click away.

If you’re a writer dealing with dozens of different projects, and you need to be able to find each of them (or each part of them) with one click, this is my favorite piece of software ever. $29 bucks, no subscription. New version updates will require payment, but there hasn’t been one yet. I love this, and recommend it: https://freeter.io/ (NOT AN AFFILIATE LINK).

Next post: Following up: To Merch, or not to Merch…