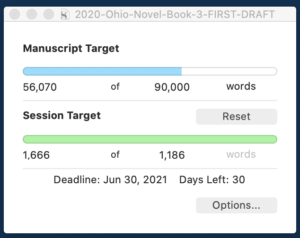 Today was a “thinking with my fingers day”. I was trying inside the story to figure out the workings of elements of the big five-book overall conflict, and I was trying to do this in a scene —

Except about 1500 words in, I realized that I hadn’t written a scene. I had done worldbuilding in the middle of the book. It’s good stuff. I can keep every bit of it, but at the same time, I probably won’t be able to use a word of it as is.

I’ll have to go through in the revision and turn this into dialogue between my MC and her sister, and I’m going to have to add action, and conflict, and then dump on my character’s heads the actual danger that the block of stuff I wrote today brings forth.

Not just all in one place, at one time, in one expository lump from Hell.

So in the moment that Editor Brain broke through and said, “Ahem — that is, if you leave it like that, going to be the most boring bit of mind-numbing nattering your readers will ever try to wade through…”

And the Expository Lump END tag:

I got good words today. They were important, and necessary — they allowed me to create an underlying part of the BIG conflict that runs through how this little town in Ohio got into world-alteringly enormous trouble, and exactly WHY this is the one place where that trouble started.

They can sit right where they are while I move back into writing scenes (which I actually did after I blocked of the Expository Lump).

In revision, however, I’ve got some work cut out for me.