Do you support slavery? Most people do. 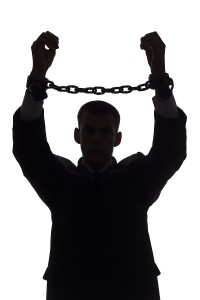 My position is that slavery is alive and well in the US and everywhere else in the world, that most people are in favor of it and actively working for its furtherance, and that most of them would deny fervently that they are doing anything of the sort.

I will support my position, and if you disagree with me you are invited to debate, but to debate, you MUST follow the blog rules.

individual rights: Every individual on this planet is born with the following inherent rights (and only these rights), which exist independent of any grant or external source, by virtue of the fact that the individual is alive:

No matter where you live, no matter what sort of government you live under, these are your rights as a human being, by virtue of your existence as a human being, and these rights may not be taken away from you ethically or legitimately for any other cause than that you have initiated force against another human being (Example: You attack someone to steal his money.), or have caused such force to be initiated. (Example: You hire a hit man to kill someone, so you bear equal guilt for murder with the person who physically killed him.)

An ethical government is the only entity which has the right to initiate force, and may initiate force against individuals or nations who have used force against its citizens or who intend to. Because it is the only entity that may legitimately initiate the use of force, ethical government must be closely controlled by ethical human beings: those who hold the preservation and protection of individual rights as their sole standard, and who do not seek to turn human beings into slaves. At present, I am unaware of the existence of any ethical governments in the world.

Involuntary and by force in the definition above are actually redundant because they mean exactly the same thing, but because most people accept one of the two above as acceptable, but not the other, I’ve included both.

There is no such thing as the right to enslave.

Now I’ll give examples, by sections of my definition of slavery.

Form 1—Outright ownership: If you walk down to the corner slave market and buy Bob so that you claim a right to force Bob do whatever you tell him to do, you are a slave owner and Bob is your slave. Same thing if you stick a gun to his head and take him into captivity so you can claim the right to force him to do what you tell him to do.  If you hire an agent of the government to capture Bob and give or sell him to you so that you may force him to work for you, you are a slaveholder, and Bob is your slave. If your local, state, or federal government sends an agent into Bob’s house to claim ownership of him so that it may force him to work, the government is a slave owner, and Bob is its slave—BUT if you are the beneficiary of the spoils of Bob’s forced labor, YOU are also a slaveholder, and Bob is YOUR slave as well as the government’s.

The euphemistic term for a human being who is not owned by an individual or government, but who does not own what he produces, is serf, but in truth, serfs are slaves.

You as an individual are free to the degree and percent that your individual rights are protected and observed by your government and other individuals, and that the products of your effort to sustain your own existence belong to you.

Some of you are looking at instance #3, and thinking, “Wait a minute, that’s, um… familiar. She doesn’t really mean that.”

Yes, it is familiar, and yes, I do mean that.

Enslavement by degree is the version of slavery most people actively and enthusiastically support for exactly as long as they can pretend that it’s not really slavery.

I had my one brush with attempting to be a slave-owner back in the early nineties, when I applied for a grant from a government-funded arts council. I was writing a book outside my normal genre, and doing it on spec, and I thought it would be nice to have a little extra money to live on while I took the chance on a book I couldn’t be sure would sell. I hoped it would sell, of course, but I couldn’t be sure, and we were hurting financially.  (I think the book I tried to get the grant for was a very early version of what became MIDNIGHT RAIN.)

I applied for the grant, waited a long time, and eventually heard back from the council. My grant application was turned down…but the reason it was turned down was both fascinating, and—when you take the time to actually think about it—horrifying.

My work did not receive a grant because it was deemed to be commercial fiction.

Okay.  What is commercial fiction?

Commercial fiction is any fiction that one human being voluntarily purchases from another human being.

If just one person is willing to pay you voluntarily for your work (not donate to you: pay you—in that you set the price, and your reader purchases the right to read your work), then you are a writer of commercial fiction. If you cannot make a living from one reader, you are STILL a commercial fiction writer. The right to the pursuit of happiness does not guarantee that you will be able to make a living wage from whatever you love and pursue. It simply grants you the right to pursue it, and if you don’t make a living wage at it and you wish to be an ethical human being, you’ll have to support yourself with a second job, the way all ethical writers start out, and the way many ethical writers continue for as long as they create.

HOWEVER, I was, back then, still screwed up enough that I was willing to look at money without questioning too hard where it came from. Before that rejection, I would have happily taken the grant, and I would not have looked at the price other people paid for it to exist.

That incident—and trying to figure out the standards by which the individual handing out the grants was using to select work—forced me to look at where the money DID come from, and by what standards it was being handed out. If commercial work—work people would happily pay for—was not considered appropriate for government-funded grants, then what work was considered appropriate?

And the answer was: Only work that the individual handing out the grants decided no one would pay for voluntarily, and that individuals should be forced to pay for, whether they liked the work or not.

Take a moment and think about that, and think about the horror that underlies it. Government money is being taken at the point of a gun (and if you would debate this point, first try not paying your income taxes, then call me from prison to let me know how that’s working out for you), and it is being taken to give to people who have not earned it.

In the case of government-funded writing grants, the money taken at the point of a gun from individuals who work to support their own existences is being given to those who are creating works some individual has decided no one would pay for voluntarily. Because that’s what non-commercial work is.

Non-commercial work is work people are not willing to pay for voluntarily, and government grants are the means by which governments force people who would not willingly buy a work to pay for it anyway.

I’ve rephrased that same statement three times, and I apologize for the repetition, but this matters.

So what sort of ethical government grants exist?  None.

If you are a writer and you accept a grant funded by government taxation, you become a slave owner. You are a person who has willingly participated in the forcible removal of the products of another individual’s production, which should by right belong solely to him to support his own existence. And, because you used an agent of the government to apply force against another human being for your benefit, you have walked away from being an ethical human being.

Remember, the right to enslave does not exist.  Not for anyone, not for any reason.

Comments on this entry are closed.