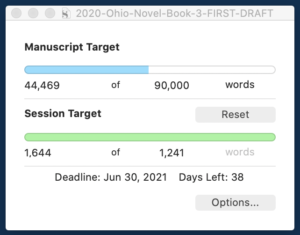 But before I get to that, I’m going to note that I’m 531 words away from hitting the NOVEL mid-point and the SERIES midpoint.

With that said, here is where I am right now.

I was tempted to run even longer than I did, but I left myself at an absolutely perfect spot to pick this up tomorrow, and here’s why.

When I stopped writing this morning:

My main character is about to step into terrible danger to save someone important to her.

She is weaponless, helpless, and going into a situation in which the person she is trying to save is going to be fighting her (for a good, but also for a terrible, reason). Any mistake she makes will kill both of them, and everything she MUST do runs counter to everything she has ever learned about what she should do in situations like this.

Which is to say, it’s the main character in a bad situation that has suddenly become so much worse than anticipated, or planned for — where she cannot do anything she knows how to do well, where everything she wants to do is prohibited, where any mistake she makes will get her and everyone she cares about killed…

And where doing nothing will have the exact same ending as doing the wrong something.

So she’s going to do something she’s never done, and is pretty sure she can’t do, knowing any mistake will be fatal…

And she’s going to see how THAT works out.

The thing is, today I wasn’t writing the scene I planned.

But because of my process, I didn’t have to, because even as I was writing against my outline, I planned toward being where I needed to be today to get this.

Line-for-scene outlining combined with a workable novel structure — they work overall even when little pieces blow up and crash and burn.

And everything I’d planned for this point wasn’t good enough.

But what my gut / Muse / left-brain Editor – right-brain Muse pitched at me in my 30-word replacement sentence this morning was.

I had an exciting few hours of writing, and I cannot wait to see what happens tomorrow.

Next post: I DID IT! I passed both the novel and the series midpoint!