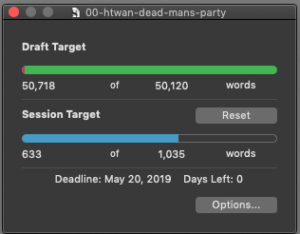 This week, because I had one week and one chapter left, I wrote a series ending, and showed how I built out pieces of story that do not exist in the first draft, but that, if I decide I want Dead Man’s Party to be the first book in a series — (all perhaps with titles of songs by Oingo Boingo…) — I could do that.

The writing went well, and now the novel, completely finished in first draft whether I want to write it as a stand-alone one-off or as a series, gets a 30-day (or slightly more) breather before I head into revising it.

Which means Monday is now an open fiction writing day.

Wednesdays through Fridays are all The Ohio Series, Book One.

Tuesday is going to stay Marketing Tuesday. I need it. A lot.

Starting next Monday, I’m rereading and annotating Moon & Sun — both The Ruby Key and The Silver Door, and out of them pulling the characters, worldbuilding, and conflicts I need to resolve in book three, which WON’T be called The Emerald Sun, but which I’ll be calling that for now, until I’ve finished the first draft.

Once I have that done, I’ll start writing M&S III on Mondays. It won’t be finished terribly quickly. But this way, it will finally get done.

HOW TO WRITE A NOVEL

The completion of my demo novel ALSO finishes the writing portions of my How to Write a Novel class.

This week I’ll be building Lesson 38, in which I show folks who have finished their first novel how to streamline and adapt the processes in the course into their own personal, flexible, reusable novel-writing system.

And then I’ll be building the Class Bonus. Still three days left to go on the vote on that, and there are still some folks who have not voted.

And the voting for the top few possibilities is CLOSE.

I’ll be building a lot of the other suggestions as inexpensive paid workshops or little classes. Not all. But there were a lot of really good ideas folks came up with in suggesting what they wanted as their included bonus, and I think a lot of other folks might find them helpful, too.

Not going to say anything that might influence the voting (like hinting what the leaders are at the moment).

HOWEVER… This is everything on the ballot

And these were the five suggestions that were more broadly applicable that I kept off the ballot. I will probably to them as stand-alones.

And this thing I think I’ll just do as a freebie for everyone: