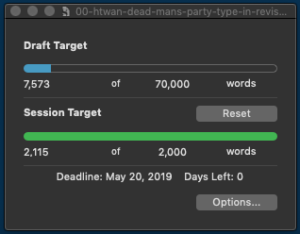 Today, just like Monday and yesterday, was 100% new words. 2115 of them at final count, probably about twice that many that I actually wrote to get the ones I kept.

So what makes this a revision, rather than a different first draft?

The fact that this time through, I know exactly where I’m going and why, what I have to accomplish with each chapter to get it to the end that I know is coming, and what each scene has to do.

I have my provisional outline, the weight of an entire first draft and entire write-in revision and the brutal crucible of the week spent in the Monastery building my focus outline.

All the crud fell away from the story when I did that, and what I’m writing now is stronger. Better.

But… even though every word is new, this is pure final revision, and I’ve been here before with other books.

Today, my Goddess of the Underworld had help from the new secondary character I realized during revision I was going to have to bring in to show the world through the eyes of a normal human being who had been one of those most harmed by the world before the Apocalypse.

I ended up writing about twice as many words as I kept. Had to keep tossing out the “As you know, Bobs” that tried to creep in.

But it was a good writing day.

Now onto the next stuff.