Dead Man’s Party – Cali on the day after 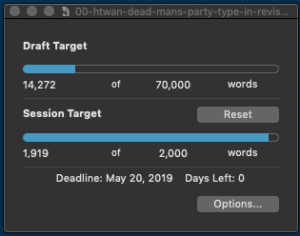 Still all new words in the type-in revision. Today was a brand-new Chapter Eight.

Five, Six, and Seven were three different takes on the same event — the point where things go from “wow, that was pretty bad” to “okay, the world has now officially fallen apart.”

Chapter Eight brings in the character who WAS my primary protagonist in the first version, now named Cali (folks who have taken How to Write a Novel will know her as Amanda).

Today, I got to play around inside her head a little, to see how she’s been coping after the Fall, and to see how she’s planning on dealing with the novel’s Big Bad (nod to Joss Whedon for the term).

The only way out is through. So I’m head down, pushing through.

Next post: Back to Words: The Dead Man’s Party Revision