Character Paranoia, and the State of Revision 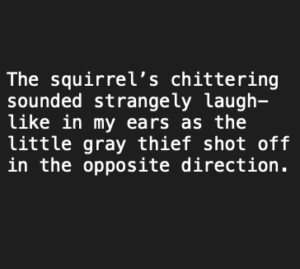 I’m past the halfway mark on the read-through-note-taking process on Ohio 2.

I have a lot of the first draft that I’ll be able to use as is.

That’s good. I have written novels where I discovered the first draft was The Story I Don’t Want To Tell (and could still run into that in Books 3, 4, or 5. It happens. Isn’t fun when it does, but at least I know how to fix it.)

About sixty percent of the first draft so far is going to take middling rework (rethinking, taking out wrong directions, adding in the better direction I’ve come up with). About ten percent is just wrong, because what I discovered in books three, four, and five while I wrote them changed some of my understanding of my world.

And there’s one story thread that I discovered while reading that gets expanded, because it’s funny, it’s scary, and I love it like bunnies.

The image is an unrelated keeper quote from the current Chapter 13, which is here because it happens to be on the page I’m starting with this morning.

But about Character Paranoia… (also related to the gray squirrel)…

My MC is suffering a bad case of it right now, because home looks like she remembered, but it doesn’t work like she remembered… and she’s discovering that the stakes attached to the house her grandma left her are a lot higher than… well… than a woman coming home to the small town she loved would hope.

Next post: Today I hit a messy part of the manuscript…

Previous post: Made it to page 188 on the write-in revision of Book 2