This morning didnвҖҷt go as IвҖҷd planned (scheduling conflicts and a calendar screw-up that broke a couple of planned things), and I was way late getting started on the words.

But the local high-school football stadium found its way into the story, and tomorrow, IвҖҷll be writing some scary, magic-y things happening there. Things that are FINALLY going to reveal the identity of one traitor…

Though not the BIG one.

The new outline is working well so far.В

The quote may В come from Helmuth von Moltke the Elder, or Carl von Clausewitz, or Dwight D. EisenhowerвҖҰ or just some dude who knew shit.

ItвҖҷs true about any sort of creation that requires spontaneous adaptation to unknowable but expected change. Like writing fiction.

I outline while knowing the nature of outlining, which is this —

The thing fictional characters do when presented with a story plan is to act around the plan вҖ” to do something that will beat the plan. Fictional heroes and villains alike invariably act like real human beings. That is, they work to improve their own odds of success inside the story, and by doing so, they invariably shift the odds in their favor, and invariably surprise me.

These surprises are good for the story вҖ” if they surprise me, they will surprise the reader.

TheyвҖҷre just such a pain in the assвҖҰ because my heroes AND my villains keep blowing up my nice, neat, carefully plotted outline.

But anyway, thatвҖҷs where I am today вҖ” several hours into my workday, having to stop to re-plot the next few scenes of my outline to maintain the structure of the story IвҖҷm building so that I can keep the cool shit one of the little jerks just did.

Tiptoeing through the minefield… and being mocked by my Muse

IвҖҷd hoped to get 1200 words net today, but after a workday that started at six AM and included very little sleep the night before, IвҖҷm going to take what I got and go do things that donвҖҷt require so much brain.

What I got, though…

I found out something absolutely enormous about the over-all series villain today вҖ” something that pretty much rocked my world.

Funny thing is, though, that this discovery is one of the sort that is going to require absolutely NO revision to get it to fit into the earlier books.

I have from time to time mentioned that while IвҖҷm writing, my Muse (the non-verbal part of my brain where most of my best ideas come from) keeps secrets from me.

Today I met one of those secrets вҖ” And this one was EPIC.

More astonishingly, I have been writing important pieces of that particular secret into the novel from day one, never recognizing the actual meaning of what I was writing.

This wasnвҖҷt a little mike-drop moment for my Muse.

This was that wicked elf dropping the mike, flashing his ass, and laughing like a loon. It was, вҖңHahahahahah! Sucker! IвҖҷve known this all along.”

(Why was my muse male today? DonвҖҷt know. It shifts.)

Anyway, while I probably got my 1250 or more in real words written, my net gain was only 846. But with the Muse revelation, which was awesome once I got over the shockвҖҰ IвҖҷll take it.

It was a good, good writing day.

That RIGHT left turn in Albuquerque

This was, overall, an excellent writing day, in which stuff happened that I was not anticipating that was way better than the stuff IвҖҷd planned. My characters were in trouble, one of them was in terrible dangerвҖҰ and still is…

BUT this was not the day IвҖҷd planned. It was betterвҖҰ but in the same way that when Bugs Bunny popped out of the ground to discover that he wasnвҖҷt where he thought heвҖҷd be, he discovered he was on the moon. Or a beach with palm trees.

IвҖҷm definitely not where I planned to be, but I am for damn sure someplace better.В

I set out to write five urban fantasy novels.В

I read a bunch of urban fantasy novels beforehand вҖ” some I really loved, and some I loathedвҖҰ but I understood why each of them was urban fantasy, and what made them THAT…

And what I planned to write was that.

These novels are not that.

A simple left turn would have gotten me to urban fantasy.

But I turned some other way, and then a bunch of other ways after that. Up, down, in a spiral, then right, through a fourth dimension, up some stairs, left at a dragon, past the monk and through a nonexistent corridor that vanished behind meвҖҰ.

Whatever kind of fantasy IвҖҷm writing, it isnвҖҷt Urban Fantasy as defined by the state of the genre as it stands. Or ever stood.

Beyond that, I donвҖҷt know.

I got the words, and I love the wordsвҖҰ but IвҖҷve just discovered have I no clue what to call these words, since I am not going where I thought I was going, IвҖҷm not writing in the genre I thought I was writing, and the core story is not behaving as I expected it to behave.

SoвҖҰ IвҖҷll just keep writing, and when I wherever the hell IвҖҷm going вҖ” well, maybe when I get there, IвҖҷll figure out what to call this.

Today was all new words, and I love them. They came at me with a complete twist from what IвҖҷd planned to write, but they still got me to where I need to be come Monday

So this was a good, good writing week. And now IвҖҷm ready for the weekend.

I am very pleased to report that the rethink on what had to happen to end Ohio Novel #3В worked.

So did the revelation I had last night that I remembered to write down in my bullet journal yesterday, which was just this:

(Names disguised because all identifying details stay under wraps until the pseudonym goes live and the books are in print.)

Is that a big nothing of a line, or what?

It doesnвҖҷt seem to have anything important in it. No promise, no wonder, no conflictвҖҰ NOTHING.

And it didnвҖҷt have any promise to me last night when I wrote it down, except that my muse said, вҖңDo it.вҖқ So I did it.

But this morning, it was magic. The final conflict in the story rolled out of that dumb line, wrapping into one solid scene a secret from a lost past, love of home and all its places, monsters and violenceвҖҰ and a couple of surprises I canвҖҷt even hint atвҖҰand it rolls perfectly into tomorrowвҖҷs work, which is to write the right scene to go before the LAST scene.

The last scene вҖ” my Book 3 Perfect Ending, is already written. It was a scene in the middle of the book that failed to fit or to mean much of anything until I saved it and just dragged it to the end of the book to save, where it revealed itself as THE RIGHT ENDING.

IвҖҷll finish Book 3 tomorrow, and Friday, IвҖҷll re-outline Book 4. (That might take more than just Friday, by the way.)

But, wowвҖҰ my muse was on a roll last night.

I still have eight unwritten chapters outlined, and I still have one character who is locked inside some deep trouble, and one whose real identity has not yet been discovered, and IвҖҷm writing toward the ending thatвҖҷs already finished so at least that wonвҖҷt go haywireвҖҰ

But SHORT AND TIGHT isnвҖҷt working out for me right now.

IвҖҷm pretty sure IвҖҷll have some things I can cut severely in the revision.

Right now, I just have to make sure I donвҖҷt leave out the essentials in the first draft.

Good writing day, where I had a lot of fun (though my main character most definitely did notвҖҰ Mwa-ha-ha-ha-ha!).

Now to hit the last items on my list.

I left myself in a good place yesterday to pick up the story today, and it went well. At this point, IвҖҷm having to keep reminding myself not to over-build the worldвҖҰ but the characters I met today are going to become some fun points of conflict in the final two books in the series.

Tomorrow, however, I have to shift back into the big core conflict of the entire five-book series, and IвҖҷm really looking forward to that.

Also, I had amiable company today вҖ” Sheldon вҖ” reminding me with occasional pats on the leg that All Work and No Play Means Cats ArenвҖҷt Getting Enough Snacks. 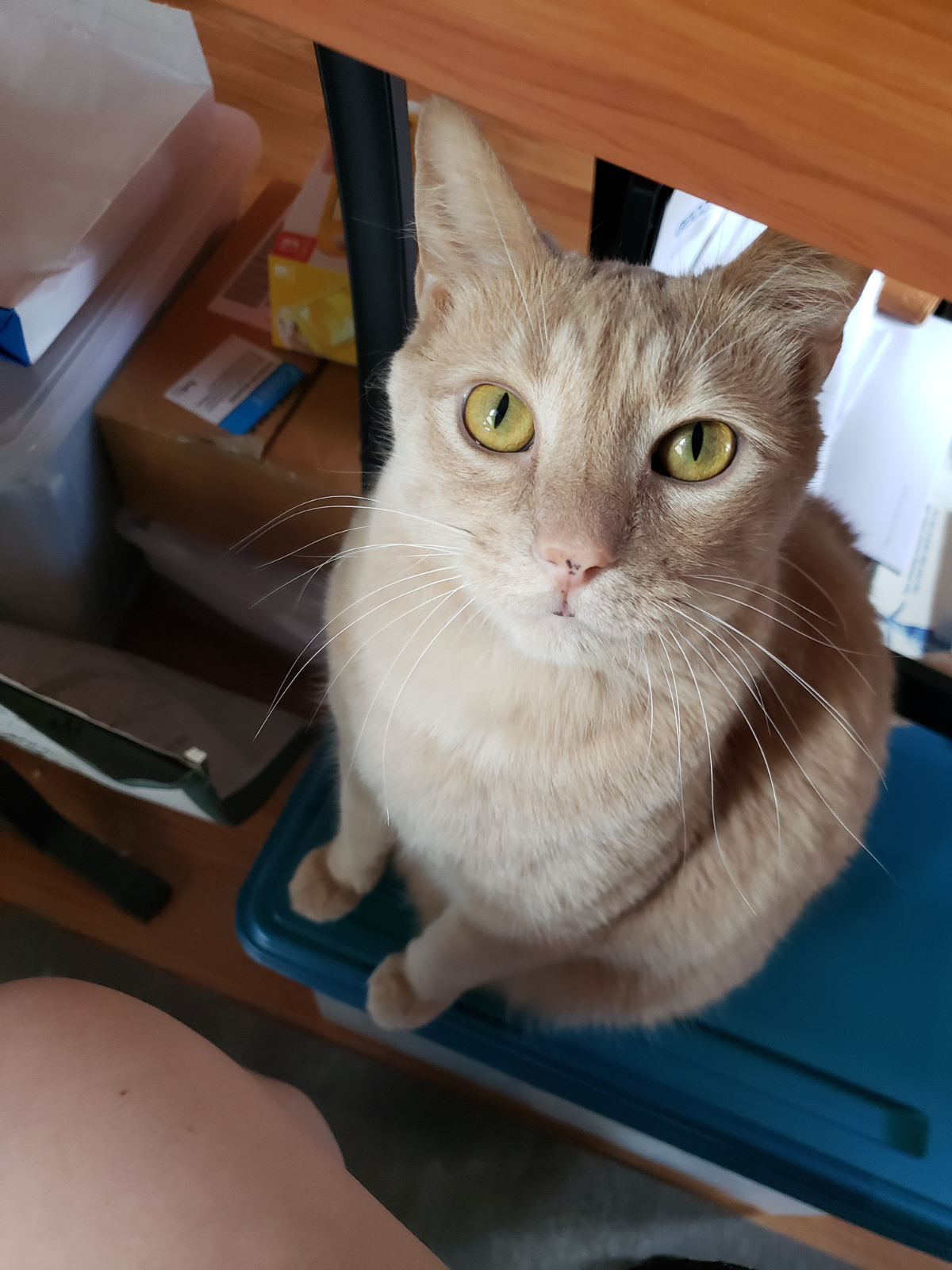 Today brought a LOT of worldbuilding into the story вҖ” and since this is first draft, some of it may come out in the revision (when I read it for the second time, and perhaps see that I got a bit carried away).

But I loved the character interaction between my main character and the very special construction guy who added a new room to her attic.В

And I had a blast giving her little snippets and warnings about some as-yet-unmet employees sheвҖҷs taking on. She never wanted employees, but one of her bigger problems in this novel (though not even remotely the biggest вҖ” lots of people and things trying to kill her is the biggest) has been making enough money to keep herself fed and to keep her inherited business running.

SheвҖҷs acquired the means now to a very good source of revenue.

I got to laugh wickedly while writing, to cackle evilly, and in the end, to set into motion a time bomb that I have to set off by book five.

God, I love this job.

IвҖҷm getting close to the end of the third book.

At the moment, things are going right for my main characterвҖҰ and days like that are fun to write.

However, all the rightness is leading up to things going wrong for my main character in ways she cannot yet even imagine.

I have a grin on my face typing this, because IВ can imagineвҖҰВ

And sheвҖҷs about to take on a whole horde of the most difficult employees in history.В

They are the stuff of legend вҖ” and so are their moments of вҖҰ impossible-ness.

And I get watch them in action while I write them.