Today I introduced a solution to one problem my MC is facing that is going to be the creator of many more problems.

And made myself laugh a couple of times while I did it, and enjoyed building out the new location that will be the source of these problems.

It was a delightful writing day (and starting in the wee small hours of the morning did not hurt, either). Got my three hours in and a better-than-necessary word-count and it‚Äôs only about ten-thirty AM as I write this.

I stopped at the logical stopping point so that I‚Äôll be able to pick back up on Monday and not wonder¬†What the hell am I supposed to do with this?

And I started today‚Äôs words out with negative numbers, because I had junk in yesterday‚Äôs words that I had to remove. Not a lot. 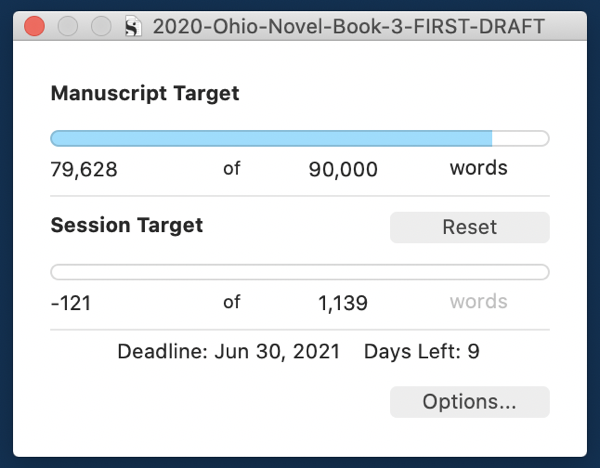 But as Fridays go, this one was better than usual.

I‚Äôm going to have to rework the ending of the outline to make that work. ¬†THAT I‚Äôll do next Monday

Have a wonderful weekend!

I‚Äôm getting close to the end of the third book.

At the moment, things are going right for my main character‚Ä¶ and days like that are fun to write.

However, all the rightness is leading up to things going wrong for my main character in ways she cannot yet even imagine.

I have a grin on my face typing this, because I¬†can imagine‚Ä¶¬†

And she‚Äôs about to take on a whole horde of the most difficult employees in history.¬†

They are the stuff of legend ‚ÄĒ and so are their moments of ‚Ä¶ impossible-ness.

And I get watch them in action while I write them.

It took the whole three hours and change, but I got my words. Met a charming not-even-remotely-human guy who is doing my MC a favor for a pretty decent price, and I‚Äôm using him and the work he‚Äôs doing for her to bring in my main character’s biggest-ever headache.

She has no clue what‚Äôs in store for her. But I do… ‚ÄĒ but either tomorrow or Friday (still have to rethink the PACT sentences for those two scenes) ‚ÄĒ she‚Äôs going to find her life changing in some incredibly inconvenient ways.

And I am already chuckling an evil chuckle and waiting with anticipation for my next writing session.

Now, though, on to all the other work for the day.

I hate sleeping in. Seriously. I ended up today starting late, being more than an hour behind before I even started, and I had a bunch of non-writing stuff to do today along with everything else. THAT‚Äôs still waiting for me.

I got 1257 of them, and oh, MAN, do I love what I got. I‚Äôm bringing some new folks into my character‚Äôs world, and they are the antithesis of characters you‚Äôd find in J.R.R. Tolkien‚Äôs world.

Which is as it should be. Much of what you learn from reading fiction both broadly and deeply is how other folks have written specific things, and why they wrote it that way, so that you can do it¬†differently while having damned good reasons for doing it differently.

There was some light worldbuilding in today‚Äôs work, and will be a bit more in tomorrow’s.

And some wicked little creatures who are going to be such fun to write. I was chuckling evilly while I thought them up this morning. And am already eager for tomorrow, so that I can bring them in and start them on their path of chaos, havoc, mayhem, and fun.

Making Money (the title of a Pratchett novel, AND what my MC did today)

Today had a bit of research tied in, so while I‚Äôve been writing since 7:30 am, I didn‚Äôt hit my word count until about four hours in.

But the writing went well. I had to research the earliest processes of making coins by hand, and then had to put my main character into a situation where she had to try coin-making the old-fashioned way. She‚Äôs not having fun ‚ÄĒ but that‚Äôs okay. I am.

I like the words I got, and I left myself in a good place to start again tomorrow. (Driving your main character nuts, then leaving her right in the middle of her mess is almost always a good place to quit. You‚Äôve already established the work and the mood of the scene, and your MC going to spend the night glowering.)

So now, on to the rest of the day‚Äôs work.

My MC today discovered the details of the legacy her grandmother left her ‚ÄĒ things that she should have known months earlier, when she first returned home.

With the full extent of her inheritance revealed to her, she‚Äôs also discovered that there were things she did wrong when she first returned home, and one critical mistake she made back then that is almost certainly going to come back to bite her in the butt.

She knows that in one instance, she has trusted exactly the wrong person. She just doesn‚Äôt know which person.

I got good words today, though they did not come quickly or easily today.

And I got to research a bit on the 1919 Volstead Act, and American Prohibition, and speakeasy bars.

I had kind of a hard start this morning ‚ÄĒ was up way too late last night, and didn‚Äôt sleep well once I got to bed, and then woke up at pretty much my regular time (just after 7 am instead of 6:30-sh). So I would have expected to be off my game.

But I‚Äôd left myself at a good place yesterday, and picking up from that scene today went pretty well. I wrote slower than usual ‚ÄĒ seriously, I could use a nap right now. But I had a lot of fun as soon as I opened up the document and started reading through yesterday‚Äôs work and doing tiny tweaks. (And fixing typos.)

By the time I started writing new words, I was rolling, and I discovered some things about my MC‚Äôs grandmother‚Äôs attic that are very cool. And really weird.

Ohio Novel Three has shifted strongly away from my updated line-for-scene outline (as they have all done in this series), but again, what I got today still managed to build on the overall five-book plan. It‚Äôs the usual issue of strategy versus tactics ‚ÄĒ the overall book strategy holds, but on the ground, the tactics have to be changeable as old scene concept get shoved aside as what I build creates better conflicts than what I was able to imagine before I built them.

So while managing tactics today, I managed to make things scarier, and creepier, and ‚ÄĒ for me ‚ÄĒ a lot more exciting to write and a lot more fun as I get to watch the story happening.

Yesterday there was a big, big surprise in a basement. I loved this bit.

Today, a portentous discovery in an attic. (This bit creeped me out.)

And tomorrow ‚ÄĒ a whiff of the traitor who is probably also a murderer.

I‚Äôve been looking forward to writing this scene. And writing it turned out to be as much fun as I‚Äôd hoped it would be.¬†I got to play a bit with Earth geology, and the problems of high finance and non-liquid assets (though I guess her new assets could be made liquid if it got hot enough)…

Anyway, today was a fun writing day that left me with a spiffy little twist I get to pick up on tomorrow‚Ä¶ and now that I have my words, I still have a bunch of time left in which to catch up with all the non-writing work that builds up over the weekend.

I‚Äôm now reworking every damn plot sentence, writing new ones before I get my words each day.¬†

The series is gathering its own momentum, stripping off bits of ‚Äúpretty‚ÄĚ and ‚Äúfancy‚ÄĚ that I thought would have a place, and getting sharper and edgier as I go.

Lots of magic ‚ÄĒ but that is cleaner, simpler, and more straightforward that what I‚Äôd imagined and initially built.

The villains are gaining power.

The heroes are feeling overwhelmed.

And while the series isn‚Äôt unfolding exactly as I‚Äôd planned, when the villains are gaining power in the middle book, and the heroes are feeling overwhelmed, things are in fact going the way they need to.

And today, my MC finally visits her accountant. She‚Äôll meet him on Monday ‚ÄĒ today she just made it past the secretary.

Monday, I think, is gonna be a LOT of fun.

A bit of extra for readers who like sneak peeks

I‚Äôve argued with myself about including this in the blog: ¬†It‚Äôs a bit of worldbuilding that I did that probably won’t end up in the book. As written, anyway.

I was working out the details of an important secondary character.¬†The character is already there. Has been in the story all along, but invisible. Makes an appearance in Book Two, but not physically. It‚Äôs‚Ä¶ complicated.

But I was trying to understand this character, and because the paper was handy and I knew I wouldn‚Äôt lose it, I started worldbuilding in my daily dot journal, and right in the middle of explaining what I needed to in upcoming scenes, the secondary character‚Äôs voice showed up.

Stand you then on this fair ground and call forth hell?
You do not know hell as I do. I am its beast,
And it has burned my flesh and ground my bones —
Devoured me, left nothing back but rage.

I know you, bitch — you pup of coward curs!
I’ve seen that face across a thousand years
And heard time and again your snivelling welp
With tail tucked ‘tween your legs…
And now I’m here.

I know your shabby soul, and I have come at last
To eat you whole, and cleanse us of your reek.

This is raw first draft, it doesn‚Äôt rhyme, and when I look at it, it‚Äôs simply a weird mood piece‚Ä¶ and as I said, it probably won‚Äôt be in the book. At least not as poetry ‚ÄĒ and why the damn monster spoke to me in iambic pentameter I cannot even begin to guess. My mind runs in iambic pentameter on occasion, but again‚Ä¶. I don‚Äôt know why.

Anyway, I’ve already written this character into the story back in book two, I think ‚ÄĒ where I met it in terrible and terrifying circumstances.

And now it‚Äôs pushing to come back.