So it turns out I’m not, much to my utter frustration, done with the print version of WARPAINT yet.

One of my only-slightly-less-rushed Wednesday people (folks who missed the print deadline, but got corrections in in time to help me with the ebook versions) found a mistake so egregious I’m going to have to re-submit the print version a THIRD time. It’s one word. But WORDS MATTER, and this one is so very much the wrong word.

So my Wednesday folks are now listed in the both the PRINT and EBOOK versions of the ACKS, instead of just in the ebook version.

And everyone will get a better book. 😀

But I’m pretty sure at this point that the eBook versions are going to be available about a week before the print version. I’m sorry about that.

Had to re-do the WARPAINT Print version

First thing this morning, found the notice from CreateSpace in my mailbox letting me know the book was good to go…”but images less than 200 dpi may appear blurry in print.”

Didn’t have any images, but I DID have the text itself.

So rather than run the chance of the book being blurry, I’ve spent the last three and a half hours exporting the Scrivener version into Pages, redoing the typesetting, spacing, headers, footers, page numbering, page breaks…

Anyway, it’s done, I’ve uploaded the NEW version, and am now starting on the bugs the folks who missed the Monday deadline caught, to do any additional necessary corrections in the ebook versions.

It took this long, but the print version of WARPAINT is now published. 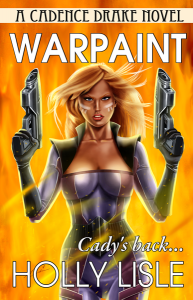 The print version of WARPAINT is done. It’s in CreateSpace waiting on a file review.

Tomorrow I’ll go through all the bug-hunt files that came in after Monday through midnight today, and do the ebook versions.

Those will almost certainly take a couple days.

Okay. The print version bug-hunt on WARPAINT is done

Dragging my dizzy self (awful vertigo today) into the office to do the page PDF version for CreateSpace, and then do the finishing touches on the cover art.

Mammoth, massive, huge, enormous thanks to the people who spent a big chunk of their weekend and Monday bug-hunting the book for me. You were awesome.

Getting close on the WARPAINT bug hunt. #wabwm

It’ll take a few days to become available for purchase, during which time I’ll go over the remaining bug sheets, and add in any additional corrections found on those, and will get the ebook version up on all the sites when that is done.

I also have a little surprise story I’ll be releasing—a previously unpublished short story that morphed into “C-The Secret Project,” a full-length novel project that I still want to write.

But the short story stands on its own, and I might as well make it available. I really like it.

So. Back to work. I’ll report any good news as it occurs.

My readers burned the midnight oil, and a bunch of them got their bug-hunt finds in to me.

I spent the weekend AWAY from the book so I would be able to actually see it today. Did what was to have been a cool promo video for WARPAINT instead—except, A) it was dumb, and B) I couldn’t get sound to work on YouTube anyway. So the weekend was a dead loss.

There’s something wrong with Screenflow 4.0.1 that’s generating dead-sound errors in YouTube (and in other software I’ve been using. I’ll HAVE to get this fixed, because Screenflow is how I create the video parts of courses. Or find something that will work.

But not today. Today, WARPAINT.

Several folks have suggested that I get in touch with the Minecraft community to let them know about the free Minecraft maps (plural—I have the space station about ready to go up, too).

I have no idea how to get the word out to Minecraft folks.

Do any of you?

First, I apologize for the broken link. It’s the first time in more than a year that I’ve typed one in by hand, then failed to test it. So of course, it would die.

Second, in spite of the link typo, I have a couple more than nine volunteers to read WARPAINT. 😉

So here’s what I’m going to do.

The first three readers are in on pure speed. You open the email that quickly, navigate past the broken link, and show up within a couple minutes of the post going live, you get to read.

Next two are in on speed of post plus best “Reason Why,” because the reason you want to do it matters a hell of a lot to me. So, working up the list from earliest to latest, I’m tapping the first two awesome-reason-why readers I come to.

HTCB Readers:
1) Did WARPAINT answer questions raised but left unanswered by HTCB? If not, which questions remain?
2) Did you find any contradictions between the first and second books that were not answered in WARPAINT?

(The meaning here, wary reader, is that I built one core part of the plot on a contraction with the first book that came about when I realized I’d done something in the novel physics of HTCB that was a disaster (Novel physics, by the way, do not relate literally to physics. “Novel physics” is a shorthand for “this is the set of rules by which my story world works.”

In WARPAINT, I solve the disaster by showing and using the contradiction AND the disaster as part of the plot. So I don’t need to know about that one. But anything else, yes.)

Non-HTCB Readers:
1) At any point, did I lose you? If so, WHERE? (The book is intended to stand alone, and I need to make sure that it does.) Just one question, but I need to know every single place where I accidentally assumed knowledge from the previous book that you didn’t have so I can fix it. And I need to hear back on this VERY quickly, so if you’re not a fast reader, please let me know so someone else can step in and take your place.

Why Does SPEED MATTER So Much?

The folks here first demonstrated the ability to respond to urgency.

There’s a lot more time for folks who are reviewing, but for folks bug-hunting or answering questions, time is critical. I want to have live copies of the book available on all platforms for all readers starting to show up by the end of next week. And to actually be able to promo the book the first part of the week after. I want at least to have it live at LEAST a few days before Christmas.

The faster you can get a good list of bugs and some good answers to questions to me, the easier making that happen becomes.

Of my original 25 folks who signed up to review Hunting The Corrigan’s Blood, sixteen moved to semi-permanent reviewer status.

Nine dropped out for various reasons (or no given reason).

Which leaves 9 openings for NEW reviewers for WARPAINT, the second Cadence Drake novel.

So here’s the deal

If you’re one of the first nine folks who posts to the page requesting a review copy and explaining why you’d like to do a review, I’ll send you one. It isn’t fancy. It’s a nicely formatted PDF set up to still be readable on e-readers, but it has no cover art or any other frills.

If you volunteer in time, you get to read the story under no obligation to review it.

HOWEVER, obviously I’m sending out copies because I need reviews, which do help sales.

Folks who do a review and send me the link to their review (Amazon, Barnes and Noble, and Apple, in that order, are my preferred
review venues, but reviews posted to blogs and sites that accept reviews of books also count), in most cases will be invited to get the NEXT book in the series to read and review, as well as other fiction projects I complete.

I say “in most cases,” because I reserve the right to drop folks from the list if they decide to roast the book rather than review it, if they indulge in personal attacks against me, or for unstated reasons that
might come up.

If you ALSO bug-hunt the manuscript for spellos and typos (no editing for style, please), you get a thank you in the Acknowledgements.

Folks who don’t do a review won’t receive the next book, because I’m trying to build up a list of 25 reliable folks who will receive my books and review them.

IMPORTANT: This is strictly volunteer. No money changes hands, and I cannot offer to read your work in exchange for you reading mine, so the only reason to do this is because you’d like to read the book before everyone else (and you might like getting your name in the ACKS).

If you’re interested, let me know (and letting me know WHY would help, too.)

If you have any questions about reviewing, ask them when you post,
and I’ll be happy to explain further.

The WARPAINT edit is DONE!

I’ll do my Publication Checklist, and get ARCs out to my reviewers as quickly after that tomorrow.

Doing my many backups now, and then the page-numbered PDF so I can find typos.

I made progress yesterday, but didn’t even come close to hitting THE END of WARPAINT. The new chapter I wrote to replace an old one killed the attempt.

So. Today, instead of trying the North Face approach, I’m going to go up the West Ridge.

Read with hunger, write with joy.