Why I’ve been AWOL

In my first run through my five-novel Ohio series, I carefully plotted the first book, wrote it, love it…

And carefully plotted the next four books.

Followed by ignoring my outlines and pantsing the novels.

Because it was fun, it was exciting, it was like being a kindergarten kid again, standing on the top of the sliding board in my slick-soled Mary Janes and skiing down standing up (until the playground teacher grabbed me and told me I was never allowed to do that again.

That same recess matron also made me stop running up the teeter-totter so that I could hit the other end before it dropped to the ground (that drop out from under me was the fun part.)

She was a killjoy — but in her defense, I never ended up in the hospital with a playground injury.

Sometimes, you know what works, and you know how you do what you do, and you have proven it through a whole lotta books and stories and deadlines…

And knowing what you know, you climb the ladder to the top of the slide anyway, thinking DAMMIT, screw the rules…

And you stand up in your Mary Janes and try skiing down the damn thing, and this time, you go over the side and hit your head on the concrete.

(Because yes, when I was a kid, school playgrounds were covered in concrete. Our parents and public schools really were trying to kill us.)

Ohio One is solid and done.

I’m managing to cannibalize some scenes from Two and Three into completely new first drafts. I’m just about finished with the PLOTTED, OUTLINED, Book Two, and this time the novel is working.

I’ll be able to use more pieces of Two and Three in Ohio Three.

However, where books Four and Five are concerned, like Bugs Bunny, I shoulda turned left in Albuquerque. I did not end up anywhere near where I wanted to be. (Bugs Bunny info at Wikipedia).

Instead, while I might be able to cannibalize a few scenes from them, Four and Five are essentially write-offs, and I’m not counting on being able to use more than the few scenes that I know still fit in the story universe.

So… this is going.

It’s not going quickly, and I’m thoroughly pissed off with myself for chasing rabbits and skiing down the sliding board standing up.

The skinned palms and skinned knees really, really weren’t worth the thrill.

The Ohio Novels: Sheldon, Because…

It’s a process. I’m doing back-to-back read-throughs of five novels (over 500,000 words of fiction, and then I’ll be doing the work to make them the books I want them to be).

First draft is where I explore what the story can become. That’s all finished.

Revision is where it becomes the story I love.

Here’s the problem: I’m not going to have anything to say about writing for a while, because I don’t do spoilers or hints, and I do all of my revision working offline on a paper copy of the book, where even if I were inclined to demonstrate progress (and I’m not, because again, I don’t do spoilers), the medium isn’t amenable. So…

Sheldon. Because once a week, I can post a picture of him, confirm that I’m making progress, and then get back to making the novels I wrote about my very odd version of Ohio into their best versions. 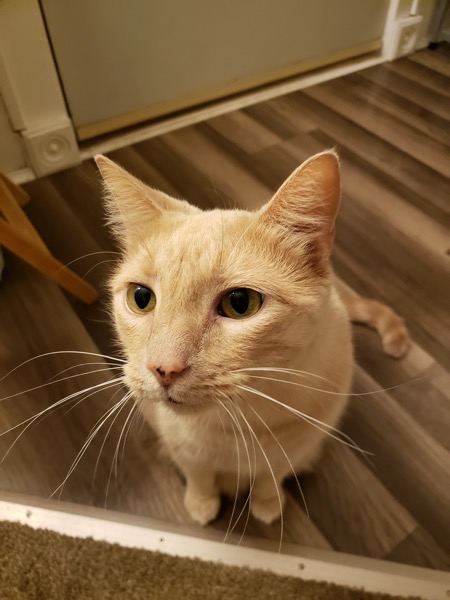 A lot of stuff is going from this part, to be replaced by some significantly better stuff following a line of thought my editor pointed out to me.

I’m excited by how things started coming together here.

Today went better. I love a LOT of Ohio 3.

I made it a nice chunk of the way through Book 3, and there is, in fact, a whole lot of story that’s worth saving — that’s funny, and in places moving, and overall very strange — but which fits the world I’ve built and the characters I’ve put into it.

So after a few stressful days, there’s actually a whole lot about Ohio Three that I’ll be keeping.

Cannot even begin to describe what a huge relief this is.

Book 2 has a lot of salvageable material. A lot of awesome world stuff, some wonderfully funny scenes, some pretty scary scenes.

It was fun for me to read, and I made myself laugh a bunch of times, got a little teary-eyed, did a light revision and passed it off to my Editor.

Matt, however, is really, really good at what he does.

And he discovered that while the story is a lot of fun, what it doesn’t have is a strong story through-line.

I had a line-for scene plot for the book built out.

It, however, lacked the sort of epic sense of wonder that made my heart beat faster while I was writing it.

So… when Epic Sense of Wonder crept past me while I was being a good girl and following the plot, my hunting brain caught the scent…

I got some great stuff out of the chase. The plot, however, got eaten by volemarines and vile scunners in the process.

So now, I’m going back and figuring out how to keep all the epic stuff, the sensawunda stuff, the glorious terrifying magic and the really creepy evil…

WHILE STILL HAVING A DAMN PLOT.

There are folks saying, “But you teach classes on how to write novels.”

Yup. I also invent and test new processes, because if you do the same thing every time, you get the same results every time. And to get BETTER results, and consequently better novels, you have to experiment.

And the person looking at the new processes, and experimenting, is the one upon whom they explode.

THIS process is not going to be in any new class coming your way from me. You can thank me later.

And more of the same… OHIO 2 (NO… THREE) Revision

I’m going through all five novels.

At the moment, I’m tearing apart Book One, which I got right, to find out where I need to take Book THREE in the revision.

It’s a complicated process, and I’m managing to give myself regular headaches going through it. And all of this is my own damn fault.

I have a good process for plotting and writing novels, but somehow, I was having so damn much fun with these that I didn’t use my process. I essentially pantsed my way through Books 2-5, having built out my four line-for-scene outlines for each of the remaining four books… and then ignoring the damn things to chase “better ideas.”

Well, if you know what works for you, and you decide to ignore your proven process to go rabbiting after “Ooooh, SHINY!!!”, you deserve what you get.

There’s damn little I’m going to be able to save. Ohio 3 is lost in the weeds.

So at this point, I’m barely even looking for things to save. I’m just looking for the story I wanted to tell but didn’t, and if I can use any of what I already wrote, great. If not… well, that’s okay, too.

This. THIS is what happens when, instead of using my system, I go chasing after that alluring “ooh, awesome” better idea.

Here’s that Wrong Left Turn In Albuquerque… and it’s as bad as I dreaded.

The first sixty pages of Ohio 3 held up fine.

Starting on manuscript page 61, I went in exactly the wrong direction, dropped the really good local character I had in place for one who broke my otherwise tight worldbuilding through two novels and the start of this one all to shit, threw in a bunch of stuff that widens the scope of one small, tightly bordered town by five… count ‘em… FIVE whole planets.

So now I’m going to read the rest of what I’ve written in this book with an eye toward finding anything I can save.

I’m going to assume there will be nothing. But I’m going to do a complete read through, just in case.

And then… oh, yippee… I’m going to pick up the plot I started on page one, and broke on page 60, and I’m going to replot.

And then be grateful that I did not pursue any of the new characters or worldbuilding in the latter part of this novel in either Book Four or Book Five.

Okay. I have the manuscript printed out.

I did some brainstorming in the shower on how I can save as much of what I remember of the story as possible WITHOUT breaking what I did in the first two books, or the last two.

Worst case, I’ll end up writing a completely new novel. That’s about as bad as fiction-writing worst cases get, though, and I’m not eager to do that.

So while I was letting the shower pound on my head, I figured out some ways I might be able to keep a lot of what I did in Book 3 WHILE working in the Primary Five-Book problem (which I didn’t figure out until I was about halfway through Book Five).

The primary problem is evident in the first chapter of Book One. I just didn’t extrapolate from RESULTS backwards to CAUSES to identify the problem until I started thinking through this massive revision.

It became clear there, it’s BEEE-YOOO-TEE-FUL!, and mostly my Muse/Gut/Subconscious Mind got all the stuff I needed into the books without me identifying why I needed them.

Not, though, in this book. In this book, I ran off chasing wild Scots, and as a result, I face a lot of work to get things on track.

However, post-shower, I don’t think I’m going to have to throw this book out and start fresh.

That’s big. From what I remember of the book, there’s a lot in it that still fits the later books, and that can be saved.

With under four-hundred manuscript pages now sitting on my desk, I’m going to do one no-touch read-through just to reacquaint myself with what’s in there. I’ll take notes in my series notebook.

THEN and ONLY THEN, I’ll brainstorm solutions to the question: What’s worth saving, and what has to go?

Finished up the type-in revision of Ohio 2 yesterday, and I love the book. Printed out the revised manuscript this morning, and have it set up for Matt to edit when he has time.

And then I opened up Ohio 3.

<cue theme from Jaws: beat head repeatedly on desk with vigor and frustration… but in time with the music, because at least I can do this with a little style>

Boy, oh, BOY did I go off in the wrong direction with that novel. I’m torn between:

Today, however, I’m going to do nothing.

I’m just off the pretty-tough revision of Ohio 2. I have to concede that my objectivity is not at its highest.

Also, I’m kind of queasy, and I don’t think it’s entirely from that first encounter with Book 3.