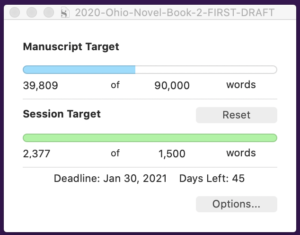 I woke up this morning knowing how Ohio #2 needed to end. And today I jumped to all the way to Chapter 25, five chapters from the planned last Chapter 30, and started writing the necessary stuff to get the story to that ending. Tomorrow, I may drop back to chapter 12, and then write toward todays work on the beginning of the ending.

Or I might write from 25 all the way to the end, and the go back and pick up the middle — though that path in the past has led to a certain amount of tinkering with middles and endings and even beginnings to get things right in the final draft.

Either way though, with the exception of choose-your-own-adventure novels, readers read fiction linearly.

And most of the time, I more or less write it that way.

I wrote 2377 words this morning — way more than I’d planned — and I wouldn’t have even stopped except I have other listed in my bullet journal that must be accomplished today.

Writing was delightful, though. I built in a good, solid hunk of action tied to a bit of a mystery — and I pretty much know how that bit of mystery ends. I could write it tomorrow. Maybe.

Then I could use that bit to write the ending, and introduce the issue that I now think is going to set up Ohio #3.

But I might let what I know and have on the page sit and age for a bit now, and go back to the empty Chapter 13, and follow up with what I wrote yesterday.

Either way, I win.

Usually I don’t know the ending until I write it. This happens for me with a lot of novels, but most spectacularly with third novel of the Secret Texts trilogy, where I had no clue at all how the thing was going to end until my right brain started pouring its surprise ending out as my fingers were moving… and that turned out to be my dream ending.

This wasn’t a dream. This was more like having a brick of fiction attached to a happy tiger cub dropped onto my head from Santa in a sleigh.

The fiction brick was nothing like what I expected.
I’ll have to find a good home for the tiger… and while it’s with me, it might leave some messes in the book as I get to the finish line.

I didn’t even believe in Santa until the bugger present-bombed me.

And the results so far have made for a pretty good surprise.

Next post: Fun, Joy, Surprises, and The Way You Want A Writing Day to Go

Previous post: Link to a special thank you for the folks funding my fiction writing time…