Back to Bashtyk: The power of play

So. I woke up at 2AM today, because there was story stuff in my head. And I wrote for four hours and got over 1000 really good words on Bashtyk Nokyd Takes The Longview.

But let me drop back on this for a minute.

In spite of the work list I revealed on January 1st, last weekend, I sat on the couch all day Saturday and all day Sunday, and did nothing but play Minecraft.

More specifically, I finally built the owner’s quarters in the Longview, which included ripping out ALL the previous owner’s quarters section, because THINGS CHANGED. I got Shay’s place built. I discovered a bunch of hidden areas in the ship, and ripped out some previous access pathways to private areas to build new and better ones.

A screenshot of the secret that gave me today’s writing. (Click for bigger image)

A screenshot of the secret that features in a candy-bar scene I’m going to love to write. (Click for bigger image) 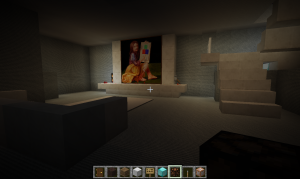 So there’ll be a new update on the Longview Minecraft map pretty soon.

And I also built some of my map of the City of Furies. It’s enormous, and right now it’s primarily land covered with cows, sheep, horses, and the occasional bunny. But I have the basic outlines laid out now, some of the gold wall built, a couple of the roads, and a GOOD start on the Pinnacle.

I played, dammit, which left me feeling happy, healthy, and rested for the first time in ages, even though I was, and still am, still coughing a lot.

So. Back to 2AM today, and the head full of story.

The story crawled out of a little secret I’d stuck into the bottom hold of the Longview a couple days earlier, and damn if it didn’t solve a bunch of previous problems, add a bit of Special Evil, and set me up for an even cooler bit of business about midway through this episode.

You must not EVER discount the power of play. It’s what lets your brain unhook from whatever stressed-out crap you’re looping on, and jumps you right over obstacles to cool solutions. It lets you understand how things connect. It brings sweet secrets out of the deep dark corners of your mind and drops them in your lap where you can touch them and turn them over and discover how you can use them.

It is beautiful stuff, is play.

Next post: Sex, Gender, Deviation, and Science: What Is Normal…and the Path to Proving It